So the third and fourth nights of my Fun Filled Week were about the ballet. Yep, you heard it right, the ballet. I don't want to sound too snobbish or anything like that. But I love to dance and I love to see dance performances. The American Ballet Theatre was in Los Angeles for a few performances. They had two different programs, a selection of three short ballets and then a performance of Le Corsaire. It almost goes without saying, but the dancing was incredible. And the dancers were incredible to look at. The men were so very handsome. The woman all looked so beautiful. And so I wanted to get into the act. Well, I was not going to perform. But I did think that going to the ballet was a special occasion and thus my outfits had to be more special than usual, I guess that means more dressy.

The first outfit is one that I bought at the Stop Staring headquarters where they sell seconds of their clothing. This gold gown I had only worn once before and that was for a photo shoot. This first shot gives you an idea of how the dress looked on me. I took most of these pics across the street from the performance venue, the Dorothy Chandler Pavilion. These were taken at some of the outdoor areas at the Disney Hall, the LA Phil performance space. 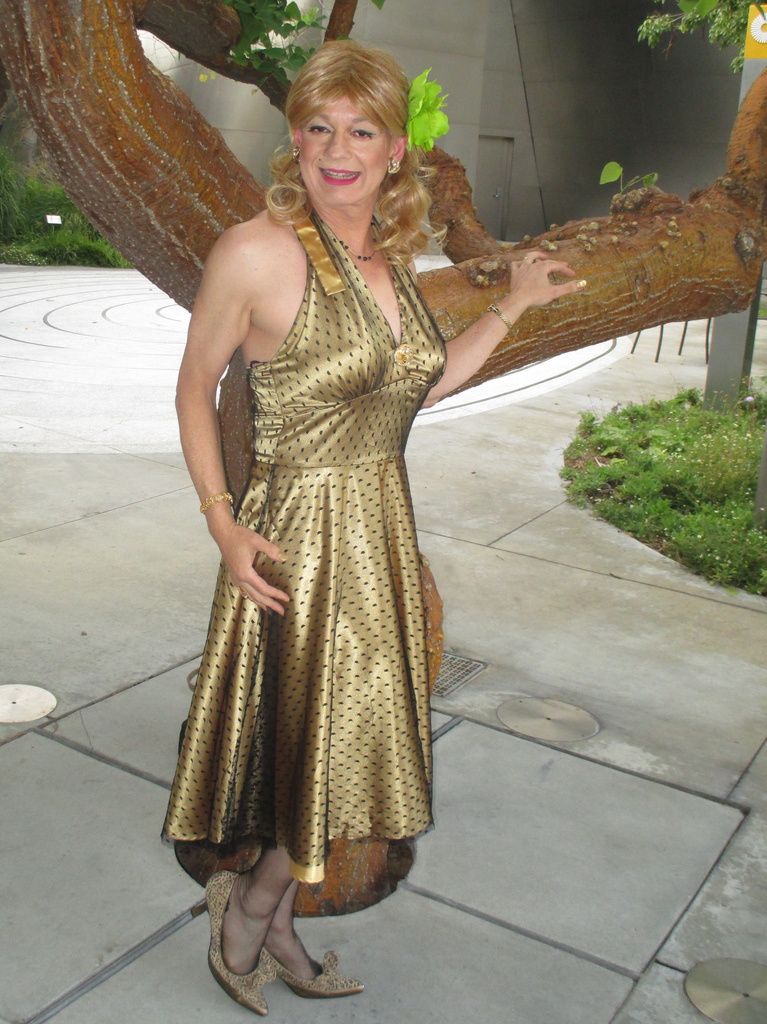 This was taken in front of the same tree. But I really wanted to get some good close ups. I was trying to for something evocative and like a true professional portrait. But it was taken with my little camera, its timer and my tripod. 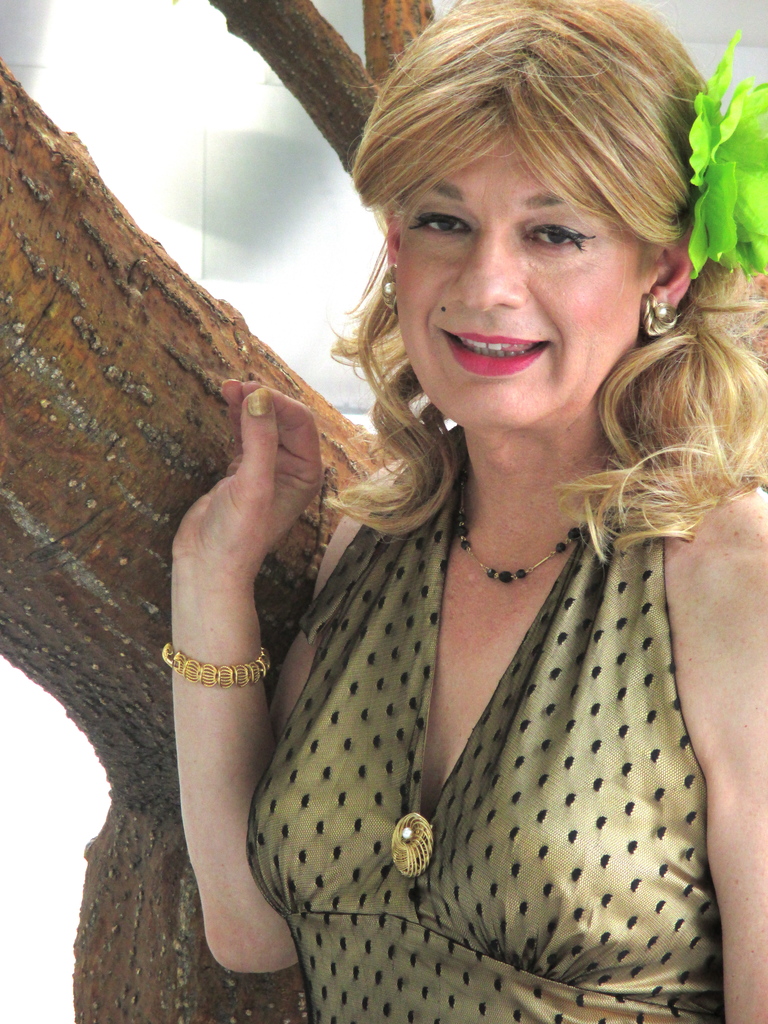 Here is one more from the upper patio at the Disney. But this one is in front of the Lotus fountain. It was a bit difficult to coordinate this using just the timer on the camera. However, I am quite happy with the way it turned out. 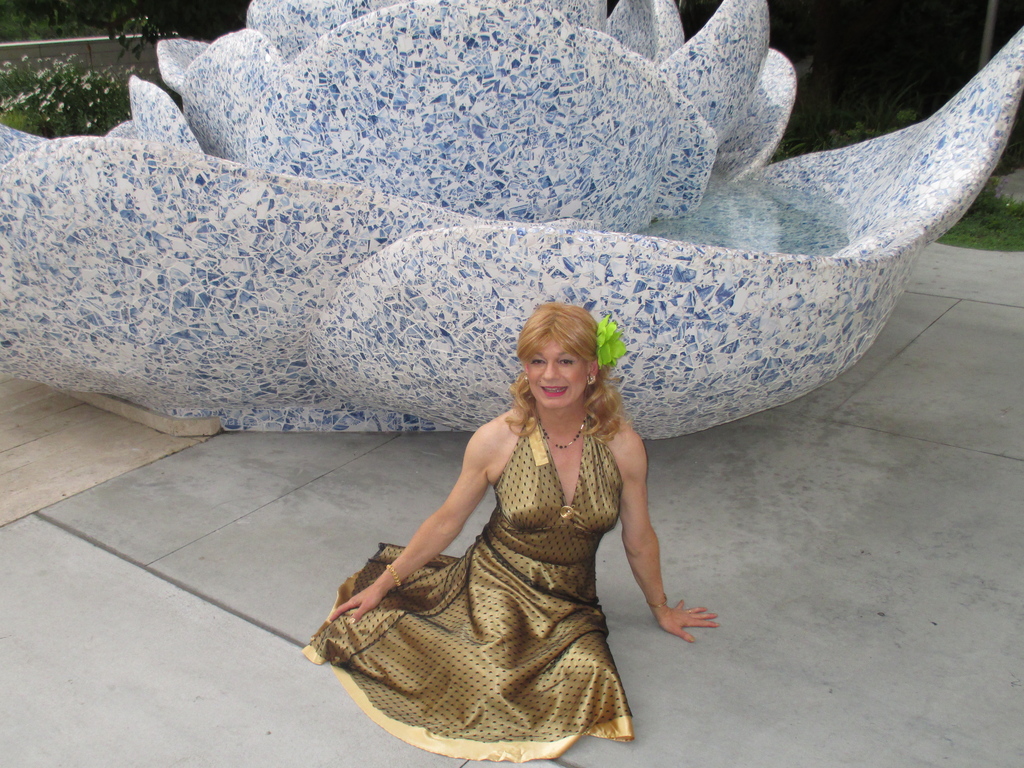 One more from that night taken at the hotel across from the concert venues at the Omni Hotel. This was taken by the waiter in the bar where I refreshed myself with a liquid libation. The second night I decided to wear a dress I'd bought on sale at a Nordstroms Rack. It was on sale marked down from like $140 to $40! I know that it is not exactly pin up but it still strikes me as a glamour girl outfit, maybe something a Hollywood star from the early sixties might have worn to a supper club. This was taken in front of the Dorothy Chandler Hall. I am not sure if I was using my small gorilla tripod for this or if a kind young man took this photo. I got pics using both methods. And one close up that I did use my little tripod for. 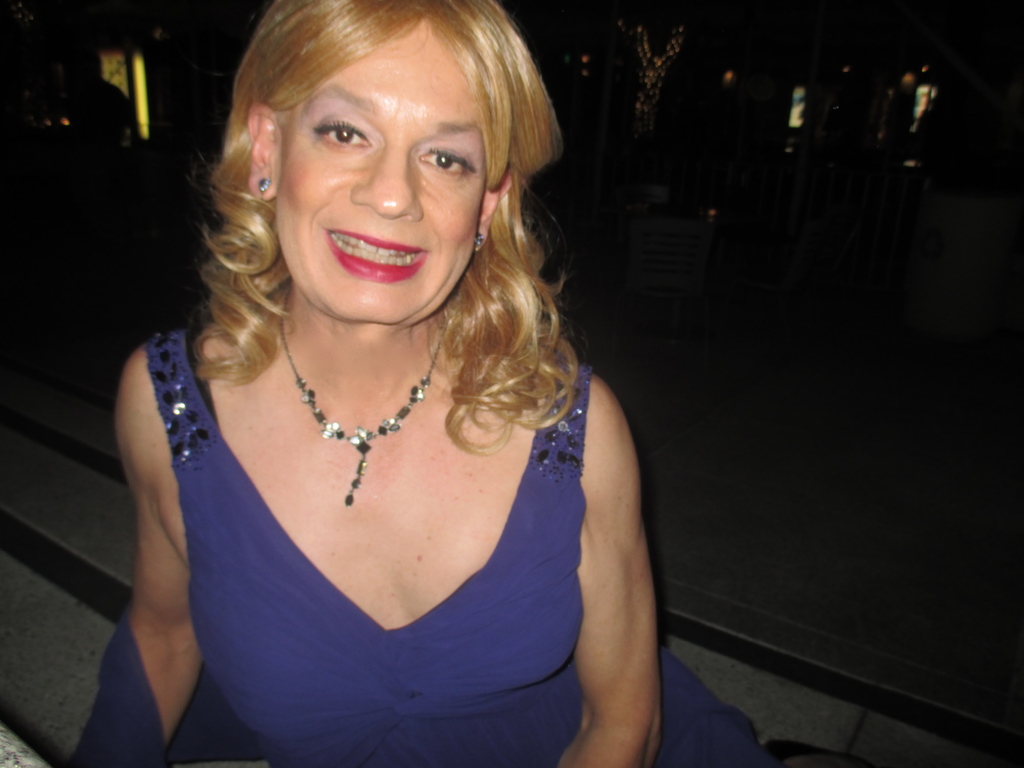 I was able to get fairly inexpensive seats for the ballet. In fact for Le Corsaire I bought tickets using Goldstar and paid only $24 for a ticket. I sat in the balcony for that performance and had a really funny conversation with a woman who started talking to me about her turtles. She told me that one of her turtles has a Twitter page. And then she showed me all sorts of funny photos on her iPhone of her turtle wearing all sorts of funny hats and clothing. have you ever seen a turtle wearing a crown? Well, now I have.

One other interesting story I have is that both nights I bought a glass of wine before the performances. I got the same female bartender both nights, even though I was seating in tow totally different levels. Anyway, the second night she got quite chatty asking me my name and just shooting the breeze. I was great to be remembered. And kindness is always rewarded, well on my part anyway. So the second night I gave her a pretty sizable tip... and I always am a good tipper.

I went out to the ballet by myself both times. But I still had a great time. And when one goes out by oneself, you never know who you will meet or what conversations you will have. But the next day I was joined by some friends...TO BE CONTINUED

Oh, where to begin?! First, I must go with you to the ballet at least once! No one in my fam or circle of non-PUG friends (that I know of) are as enthused to go to the ballet or a play or a musical as you are!! There is a reason the brand for that dress is called Stop Staring - you look fabulous! LOVE gold on you - both this one and the PUG gold dress really bring out the inner vamp in you, and you always look fantastic! Love the brooch too!! And give yourself some more credit - you do a fantastic job with your tripod and timer!

I love the blue dress as well; I totally get the 60s night on the town vibe. Next time you'll have to ask for the twitter name so we can go and check out the totally bizarre things you find out when you're out and about. The turtle wearing a crown sounds hilariously fantastic (almost better than my Coco wearing clothes, but not quite. However, I am biased on that one!)! And yes, you always are a great tipper - so glad you had a great server to tip!

I love the ballet, it is 100% NOT snobbish! You look gorgeous in both of those dresses, although I think I like the gold Stop Staring a little better. I love the shot in front of the lotus fountain, classic pinup and you look gorgeous!

I love the photos you took of yourself, especially the one in front of the lotus fountain - although it must have been pretty difficult to coordinate yourself - I have a remote shutter release for if I'm feeling adventurous lol

I think you look fabulous! Every lady should experience the greatness that is the American Ballet at some point in life.