Five Nights Of Fun (nights one and two)

Life rarely presents me with five nights/days in a row of getting to look my best and doing fun, out and about activities. But about a week ago I had that opportunity. And I took full advantage of it. If you don't mind I will take full advantage here to do a bit of show and tell.

It all started on a Tuesday. I had nothing specific planned. But I knew that I wanted to do something. In fact, I got dressed and got in my car before I knew where I was heading. It was a fairly warm Southern California evening. So I decided to wear something sleeveless. Before I had heard about PUG, I found a Chinese manufacturer of mostly vintage style clothing. They are called Chic Style. I have ordered from them a couple of times. The quality of their clothing is not that great, but of course the prices are very good. And they do have a photo sharing space which when you post to it, gets a small credit in their online store. So anyway, I wore this black and white polka dot number. It came with a little shrug but I was not satisfied with the way it looked on me so I went shrug-less. Once I got ready and started driving I still could not make up my mind about where to go. Thankfully I finally made a decision. I went to the very classy Langham Hotel in Pasadena and I had drinks and dinner in the bar. Since I was by myself, I knew that it would be a beautiful and safe place to hang out at. Here are a couple of photos of me taken that night. Nothing much happened, but it was a nice way to slowly start my fun times. 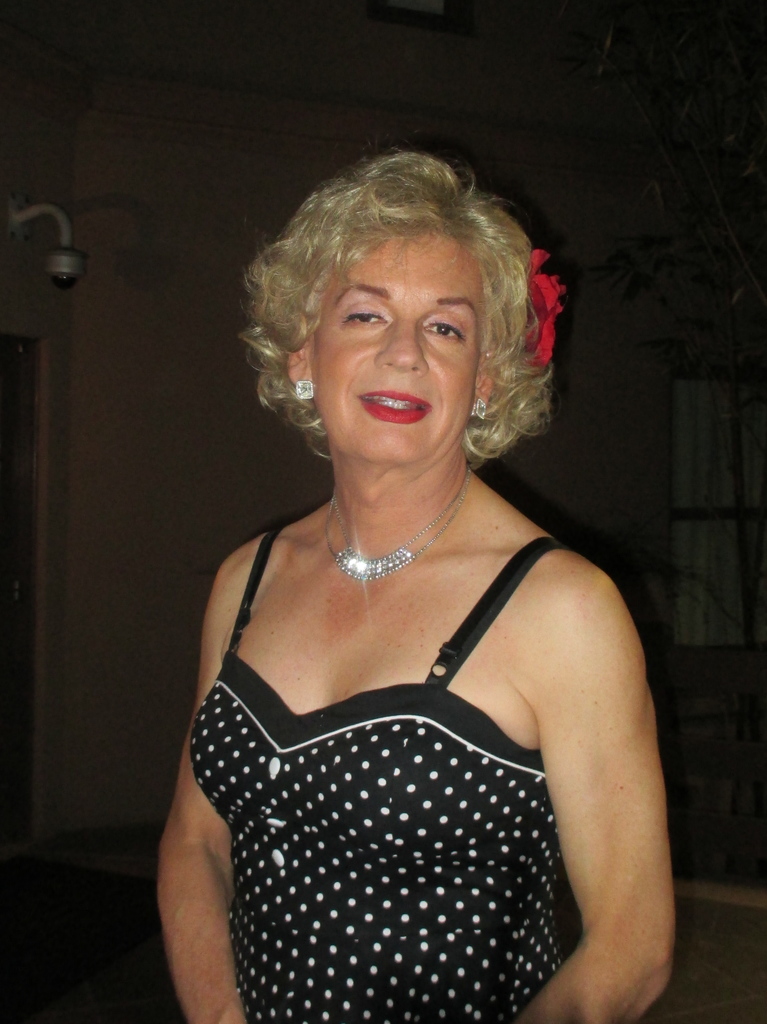 For those of you who are wondering. I was drinking a martini. I had ordered the cheese plate for dinner and on the table is the complimentary nut selection. YUMMY! The next night I had scheduled to meet up with my friend, Jenn AKA Desilu. I have talked about before in my entries about how I got to know her from this PUG Style forum. We have now gotten together as often as our schedules would coincide for Girls Nights Out. I did do planning for this evening. I wanted to go somewhere which evoked the dinner clubs and restaurants of the Fifties and early Sixties. I chose the Dal Rae restaurant in the city of Pico Rivera. It is a very classy, old school restaurant stuck in a very bizarre location in a city not known for fine dining. But the food is great, the service is impeccable and the ambience is wonderful. It is a steak and seafood kind of place. I had shrimp and Desilu had steak. We covered all of the bases! Desilu and I always have great times together. The time seemed to fly by this night. We just talked our heads off, well when we weren't eating our tasting our beverages. The restaurant was packed and it was a Wednesday evening. And I guess that it goes without saying that many of the restaurant patrons were old school themselves and probably have been going to the restaurant for fifty years or so. I have a few photos to share with you. First of all the neon sign of the restaurant: Then here is a photo of the two of us at our table taken by our very handsome waiter. By the way, he was definitely not old school. He was quite young and had that typical California boy look. 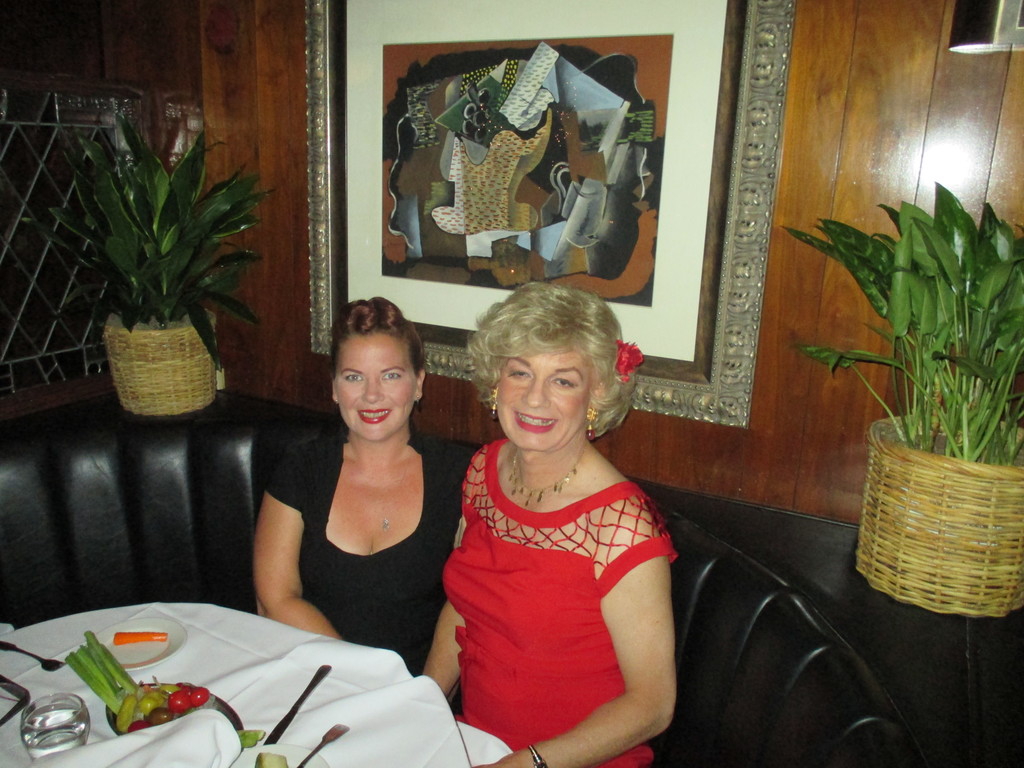 Here is my favorite pic of Desilu that I've ever taken. She looks so amazing! And I guess that I should post this one of me. My blush that night turned out to look way too bright. After I saw my first photo I did some makeup adjustment and it looked a bit better. The blush was one I don't use normally. It is going in the trash! 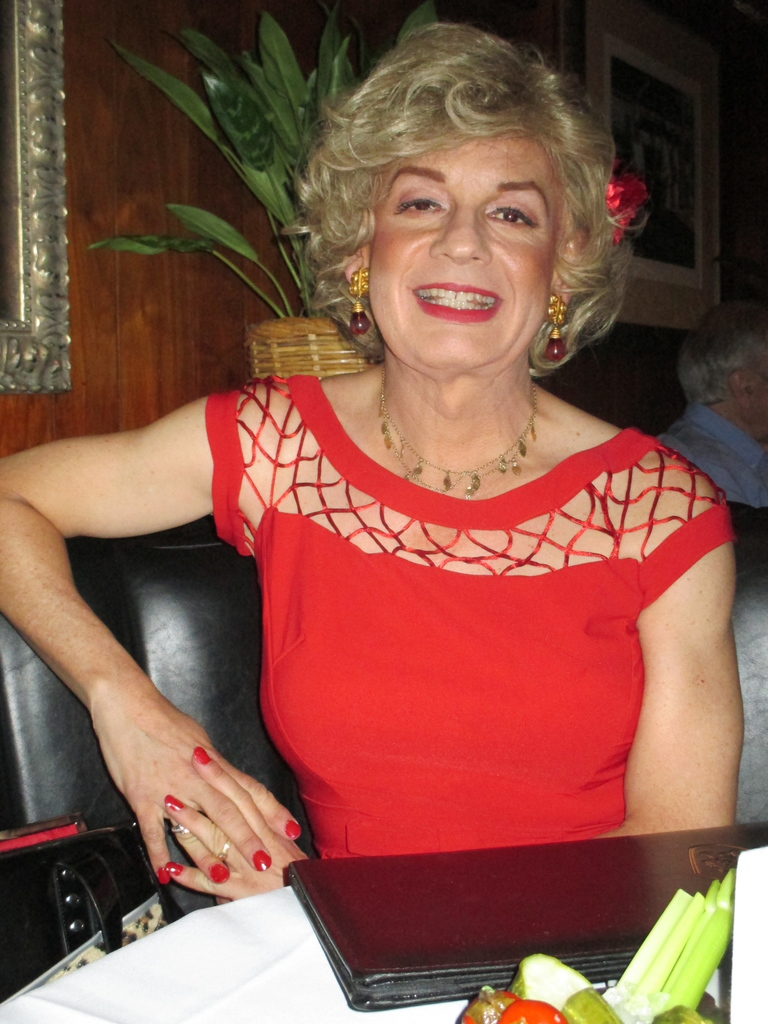 I just realized that I totally forgot to talk about what I was wearing. I was up in Portland during the Fourth of July weekend for their annual Blues Festival. I got an email from Bettie Page clothing that they were having a sale on some of their red, white and blue clothing. Since there was a BP store in Portland I decided I should take a look. I had been thinking about buying this dress anyway, but when I tried it on, I had to have it. And I got it at twenty per cent off normal price. The earrings I bought at a vintage fair in London back in January. I bought them from a guy who primarily gets things from Mali.

I also would like to humbly mention a couple things about what Desilu has. We are both members of the PUG Pals group here. And for those of you in the know, it is a group primarily founded by Leanna Bruce. It was developed to bring us PUG Style members, from all over the world, a little closer together. So we have started sending each other little packages of goodies. My first package was from Desilu. Check out PUG Pals if you want to read about it. Desilu is displaying a couple of the things that I sent her. The first and most obvious thing is the clutch handbag she has. I found it at one of my favorite vintage stores and I knew that it would be just right for my friend. She is also wearing some vintage hose that I found. It was a package of a few pairs of vintage stockings that had never been worn. And again I thought that they would be just right for my friend.

Stay tuned for more of my adventures!

I love that red dress, it looks so cute on you Aoife; but look at you, making me all jealous about your vintage stores again :p

That night was so much fun! And you owned that BP dress - it looked fantastic on you!! And I must say, her blush did NOT look that way in person, but I think it was the result of the flash, more than anything. The Dal Rae was amazing, and you failed to mention that it's been used in Mad Men shoots as well! The stockings were fantastic & I LOVE the clutch; I couldn't wait to use them! Had so much fun and can't wait til next time!!

And Jessica, I think a week would be the bare minimum... and you definitely have to have dinner with Aoife and I - we have the greatest time!!

Love it! Both you and Desilu look fabulous! The blush doesn't look so bad actually, the 'thing' here is to wear it so bright that it looks fake so yours is actually kind of toned down ,  looks like you had so much fun!

You never cease to wow and leave my jaw on the floor Aoife with your stories and your pictures. You look absolutely incredible and Desilu looks amazing too :)

I agree with Brandi that black and white polka dot dress is my favourite too!

Thanks ladies for these wonderful comments. It is always great to get such wonderful feedback and positive reinforcement from my PUG Peers. You gals are amazing! I am blessed to have you all as friends!