Five Nights Of Fun (night five AKA The Meet Up)

Night five was to be the big blowout! It did not exactly work out that way. But it turned out very well indeed. So I had attempted to organize a Meet Up on Saturday July 13th. We were to meet at the Boutique. Then there would be shopping and hanging out for an hour or two. Next it was to be off to a restaurant for dinner. And then finally there would be attendance at a burlesque performance. That was the plan.

Chacha Billy and I were carpooling from the Eastside of LA. We left at about 3:30. I figured that we'd get to the Boutique at about 4:15 or so. Well there was a horrible truck accident on the freeway that day. I'd checked out the traffic on my computer before I left home, but I did not notice the accident. Anyway, the traffic got slower and slower. It took us 2 hours and 15 minutes to get to the store. BUMMER! Just a few minutes before us Auburn Hills and Kel Swann had arrived there. We asked Margarita, one of the lovely Boutque employees, if anyone else had shown up for the Meet Up. She said that she was unaware of anyone else having shown up. In fact, I later found out that Natalie and Rhonda Tinch-Mize came to the Boutique but left when none of the rest of us were there. Let me take this opportunity to apologize to Natalie and Rhonda. I am so sorry that we were not there when we planned on getting there. On the plus side Chacha and I got to know each other a lot better. We had met a few months ago when some of the ladies associated with PUG had a yardsale in Whittier. We met each other then and have corresponded a lot since. But we'd not been able to get together until this day. So it was really good to get to talk our heads off during that long drive. Plus I was able to draft Chacha into the role of navigator when we had to drive a different route due to the truck accident.

I had decided that we would journey to Downtown LA after the PUG shopping trip. I won't bore you with the details. But we saw that the traffic was just as bad going away from the accident as it was going towards it. So I decided that we needed to totally change our plans. That was easy to do because it was just the four of us. Auburn Hills and Kel Swann were able to put their heads together and came up with the idea of going to a restaurant in Glendale, Damon's Steakhouse. The restaurant has kind of a Tiki theme going on. It had a bar, and we all agreed that drinks were in order. And it had food. What more could four women want? OK, maybe there are a few more things we'd want but we will save those for another discussion.

You know I have to say just one thing before I go on. Once we got to the Boutique we had an absolutely wonderful time. i did not even mention that I bought some really cute shoes. Chacha bought a cute Tshirt. And I think Ms Auburn bought some item of clothing. Now of course you all want to see photos. Don't you? First pic is of Chacha wearing a dress she tried on. My God she looked amazing in it! She just has to wait awhile before she purchases it. And if her husband reads this BUY IT FOR HER! 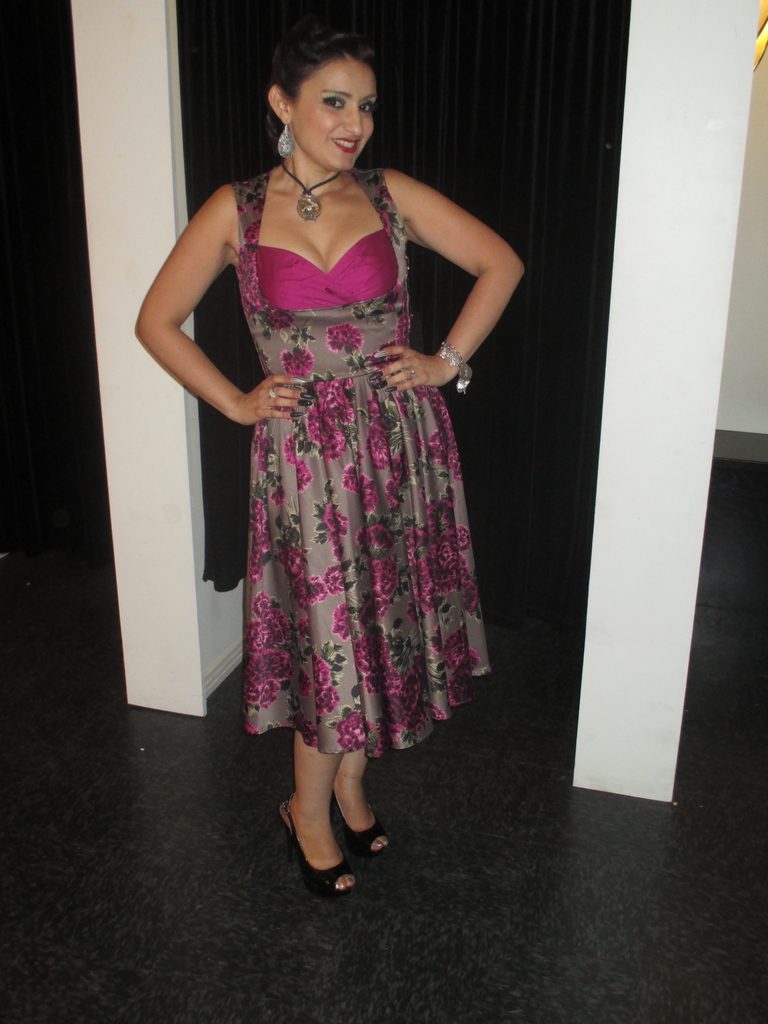 Next up are a couple taken inside the store. The ladies looked so amazing. They will have to tell you what they were wearing. I had on a vintage dress originally from the department store I Magnin. I imagine that it was made in the early Sixties. I wore it with a petticoat which I think helped give it that vintage pop. I previously wore the dress when out with Desilu at the Shecky's debacle. But that time I did not wear the petticoat. I showed these photos to the woman who does my facials. She said that she liked the dress but that I should be wearing something more sexy. Oh well. First here is a pic of us in full: 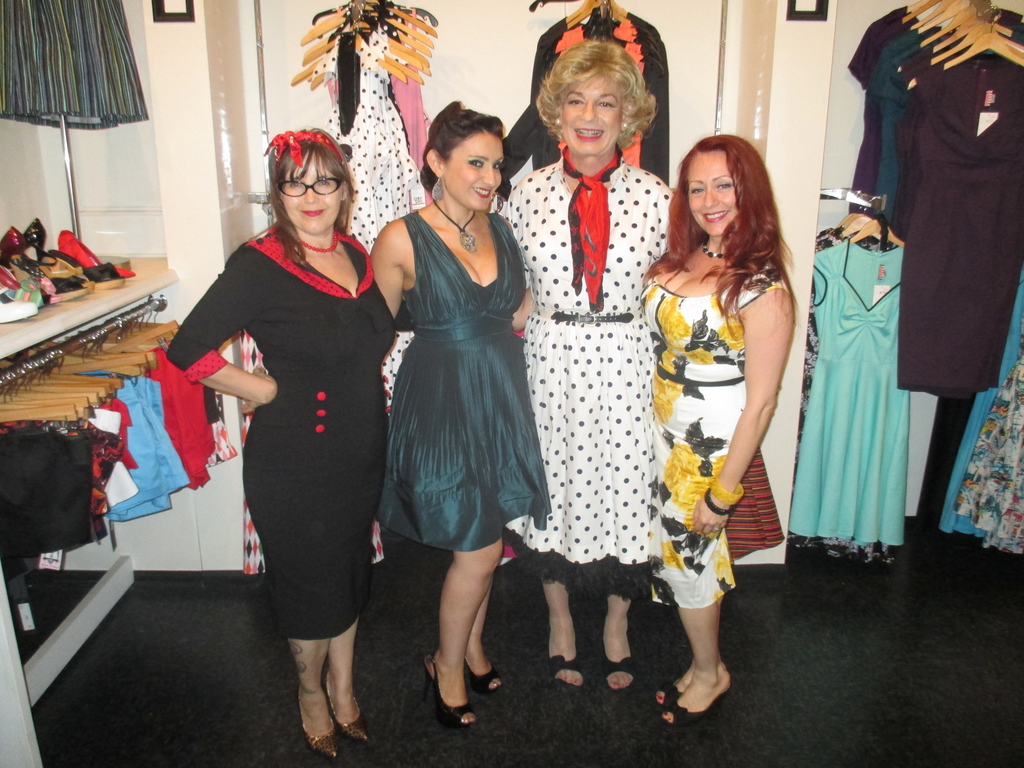 Then here is a closer up shot: 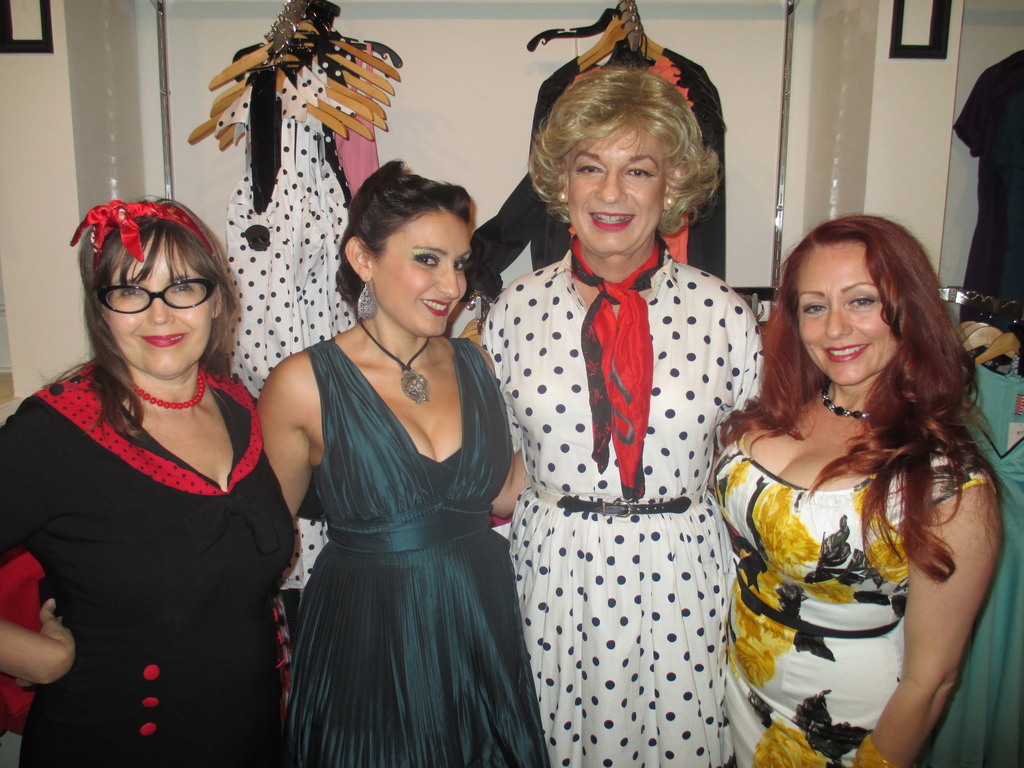 And then we have one taken outside the store by a kind customer: 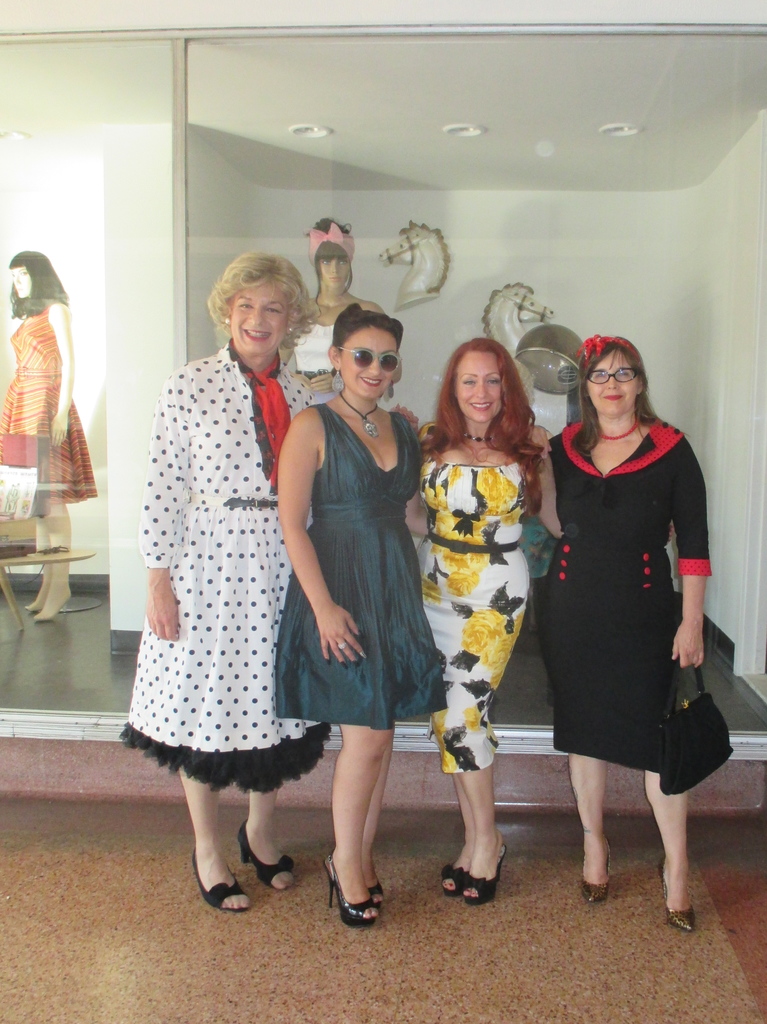 Finally here is one of us taken at Damon's Restaurant. It was taken by Helen, our Scottish waitress. She was a totally old school waitress. She was not an actor waiting for her big break. She was a real honest to God waitress. And she totally hilarious. She even danced with me a Scottish dance as the four of us left the restaurant. The four of us all have a mutual interest in pin up and vintage glamour. But we had so many other things to share with each other. We kept laughing the whole night through. I think that this was the third or fourth time that I'd met Auburn Hills. Each meeting is better than the last one! And things started out wonderfully. Kel Swann was totally unknown to me prior to this night. And we hit it off immediately, we even both had to ask each other our names a couple of times. I DO know her name now! Chacha has such an interesting life and so many interesting stories to tell. And dolls can you believe those... nails? Amazing! 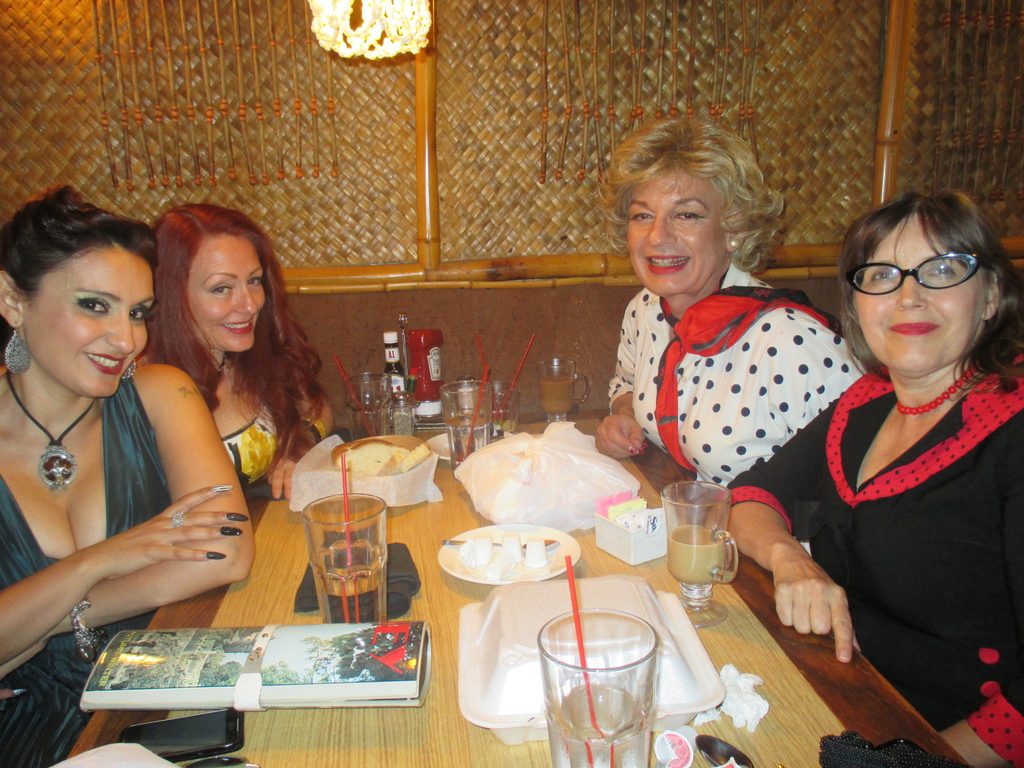 I could tell lots of stories. But maybe my Meet Up sisters will be willing to share a bit from their perspectives.

I have one more thing to say. I have already decided to plan another Meet Up! This time I am attempting to do a tea party. I tried one once before and I got to have a great day with Dorthy Treasure. But this time I am hoping to have a  bigger attendance. It will be on Saturday, August 17th. Check out the Ladies of Los Angeles group for details. Things are still being decided at this point.

I guess that I do have one more thing to say. Pin Up Girls are the nicest people. I am truly honored to have bcome part of this community and to have found so many wonderful women as friends!

oh wow you ladies look great! It sounds like your get-together had a few hitches, but overall went well :)  I would love to have a meetup at some point, maybe one in the Netherlands first though. Hope you all had fun and good luck with tea!

I'm so glad you all had such a great time, traffic was a nightmare that day.  I can't make it on the 17th but will be on the lookout for other meet ups. Oh and I'll be at the boutique tonight so be sure to say hello if you see me!  I'll be wearing an olive je t'adore dress.

You all look so wonderful!  I'm glad you had a good time despite a few setbacks.

The dress looks great with a petticoat underneath, and the scarf is a great touch! And the dress on Chacha - oh. my. GAWD... please please please, may your esposo buy it for you - it looks like it was made for you!!! I'm so glad the meet-up did make it, even with debacles at hand. And everyone looks fantastic! I was going to do the 17th, but they just told me it was one of work black-out dates, so I can't take it off. I swear, one of these meet-ups (weekend or not) I WILL GO! (I was especially loving the tea idea, and had already planned out which dress I would wear that would be perfect for tea; ugh.)
I do hope that a couple of the other girls share their thoughts... And anytime with you is a blast Aoife!!

OOOOH I had a blast that day !! It was a great adventure and getting to know my fellow pug sisters !! As for the dress well so far Im gonna have to go back soon to PUG store . I have a big wedding coming up and of course i have to go on a mini diet . But I have to get that dress . LOL . Auburn you are such a great gal I had a blast with you and our chitchat was awesome . And my Kel was just such a sweetheart I loved the story about the dress with no arm pits story . And my love Aoifa I had an adventure on the way over there .Cant wait for our next meeting ladies . I hope to meet more sisters .