Well dolls, I think that it is time for me to do another blog post. I have had some fun activities recently which I thought I might share. And I particularly am eager to share some of these activities because they feature my friend Double O Jenn who has just returned to the PUG Style sisterhood.

As I have written about before, joining PUG Style has provided me with a new wonderful group of friends, women who are beautiful, intelligent and very interesting. One of those friends that I have made is Jenn. We first met here in discussions in this group. Then I met her by chance one day when she was at her job and I had been out shopping. We had our first girl's night out in early January of this year. Due to all sorts of reasons we did not get together again until just a few weeks ago. So we set a date to meet and decided on going to a club restaurant in Claremont, California. It is a place called the Hip Kitty. Most nights of the week they have entertainment, usually swing related bands. The night we went there was no entertainment. But we did share their signature dish, fondue. Yes that staple dish of dinner parties from back in the Fifties and Sixties is their featured item. What could be more fun than sharing a hot cheesy dip, spearing pieces of bread and veggies into it while trying to look as ladylike as possible. Sadly we did not get any good photos in the restaurant but I brought along my tripod and we got a very good pic of us outside the restaurant. Then this past Friday night we got together again. I had bought tickets from the discount ticket service Goldstar for an event called Shecky's Girls Night Out. A sorts of items were supposed to be available that would be of interest to women. And a goody bag was included in the admission price. Well this event turned out to be a total dud! We had to wait in line almost two hours to get in. Our goody bag included a granola bar, a coconut water drink and a chapstick and some coupons. We did get lots of time to chat. But with so many women waiting in line inside the hallway of a building, it got very loud and was difficult to hear. The only real consolation was that I found a pair of Pin Up Couture heels for sale at a really good price. Jenn and I had our picture taken at a booth for Veet. And the photo follows. I had hoped that we would be able to make it to the PUG Boutique in order to go to the release party of the I Am Sin makeup line. I knew that would be fun. But all of the waiting in line meant that we could not make it in time. Oh and I also started feeling kind of yucky while at the Shecky's thing. But I will spare you the details of that. 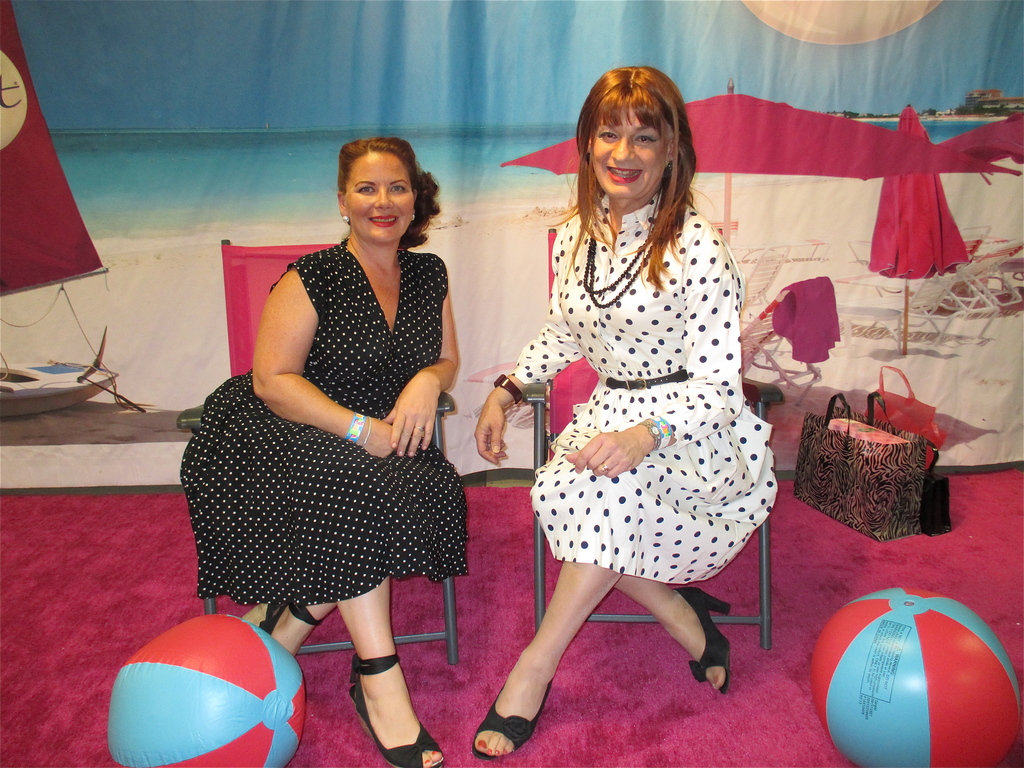 I must tell you that we had not planned in advance to both wear polka dot dresses. I guess that intelligent minds think alike! I had just purchased my dress from a vintage clothing store in the city of Covina here in the LA area. The dress was sold at the old upscale department store, I Magnin. Somehow I have managed to get wholesale discounts from the boutique where I bought the dress. That dress another dress that looks to be from the Thirties and a Hawaiian shirt cost me a total of only $40!!! The owner of the store told me that she just bought the entire inventory of a person who used to have a vintage boutique in Hollywood. The clothes had been in storage in the desert for the past 20 years. She told me that if I want to return, and if I want to bring friends, we can go through all of the items, she has tons, and we can buy to our hearts delight!

Well now for something completely different. I thought that I would share an experience that I had during the Memorial Day weekend. I went with my spouse and joined friends in Seattle, Washington for the Northwest Folklife Festival. It took place the Friday, Saturday, Sunday and Monday of Memorial Day. There were performances, workshops and dances of all sorts of music from all over the world. There are about twenty different performances going on at a time. And every single event is absolutely free. I took a few pics during the weekend and made a little collage just to show a few things. We heard a few good rockabilly bands. We danced to our heart's content to Balkan and Gypsy music. The Balkan band whose photo I have here is called the Bucharest Drinking Team. Check out the to die for shoes on the singer on the right. There was Cajun music, vintage bands playing music of the Twenties, Old Timey American music, belly dancing... and on and on. It was truly amazing. I thought I would close this edition with a bit of a heads up, especially for those of you here in Southern California. I am trying to arrange another Meet Up for Saturday July the 13th. It is still open as to what we will do. I have already had some positive responses so we will be doing something. As things are firmed up I will be posting updates. Anyone who is interested is encouraged to join us. The other Meet Up things we have had were really fun. And one final thing if you want to check out some vintage style music for free, Vaud and the Villains will be playing at the Levitt Pavilion in MacArthur Park on Saturday, June 22. I have been going to concerts there for the past few years and it is a perfectly safe and a really interesting outdoor venue. And every concert there is free! http://www.levittla.org/

Comment by Amber on June 5, 2013 at 5:57pm
Great pictures! You and Jen look great. :-) I'm uber jealous of your vintage store jackpot too! I need to find a lady willing to sell me awesome vintage at great prices, haha.

Great pictures, you to look so great, I'm kind of jealous of how much retro stuff you find in stores there! If I'm ever in the area we are definitely hanging out! Hope you had fun :)

It was a blast, particularly dinner at Hip Kitty & Mohawk Bend (in January). The dress I have on is a vintage 60's trapeze from an English designer (whose name escapes me at the moment). I have had it for almost a year now, but never had any where to wear it to, so I thought that night was perfect!! And the polka dot dress was a fluke - it's a $20 dress from Walmart that is not a true vintage dress, but a very vintage pattern, and looks fantastic when I put my petticoat on underneath it (which is why my butt looks so big and extended, lol). The polka dots totally worked for us too... And at least now we know not to do Sheckey's again, and to not recommend it to anyone, lol. Live and learn... I'll request the 13th off if I can, can't wait!