Whether it’s your first Pinup Girl Yardsale or you’re a seasoned pro, I’m here to talk you through what to expect when attending one of these stupendously awesome events...

But who the hell am I you ask? My name is Sydney Ralston. You may know me from that one time I modeled swimwear and prom dresses for Pinup Girl Clothing. Aside from that involvement with Pinup Girl, I am also a seasoned veteran of the infamous “Pinup Girl Yardsale” – going back to when it was a couple of racks of clothing under a pink easy up in what looked like one of the locations on A&E’s “Storage Wars”. 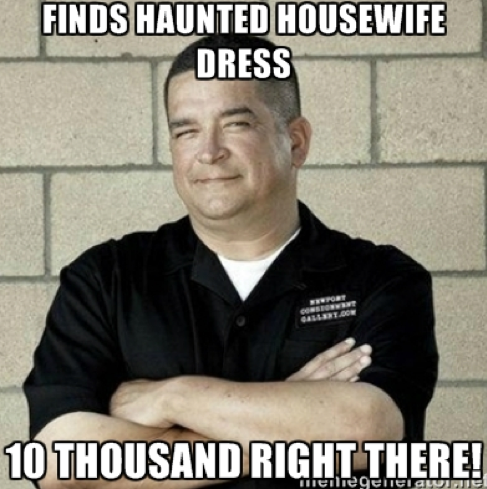 I haven’t attended every one of these events, but I know enough about them to type out a guide that I am confident enough about to be seen by maybe ten people. My status as a Pinup Girl Model also gives me some sort of authority (because I say so), so there you have it.

For me, my Pinup Girl Yardsale success is determined by how well I plan before I even go.

What I mean by that is that I come mentally locked onto certain items. When I go, I know what I will be looking for. Perhaps you’re looking for dresses, perhaps you need separates, or shoes, or swimwear. Either way, come with an evil plan.

Make a “fantasy wishlist” – but don’t get your expectations too high. Most likely, there will not be any brand new styles at the event. If you want to make a realistic “fantasy wishlist”, I’d recommend taking a look at the sale section of the website and make a note of which styles have been around a while.

Finally – know your sizes. I’m not the kind of person to try things on at the event because then I’d be spending more time than I want to there and generally I know how I’m going to look in the clothes and what colors work on me. I go in knowing my size in EVERY item I can.

If you’re the kind of person who likes to see things on your body before you buy them, then at least know your size so that you know what to take into the dressing room – because if you grab the wrong size the first time, the right size in that EXACT item may not be there when you come out.

If you’re a ninja like me and yet you don’t own enough PUG to know what it looks like on your body – I suggest going to one of the locations in which its sold at a brick-­‐and-­‐mortar store to try things on in advance.

One of the most common questions is, “what time should I get there?”

In the past, time was of the essence – not so much as “get there before all of the what I consider good stuff is gone” but, “GET THERE BEFORE IT’S ALL GONE. EVERYTHING. THERE WON’T EVEN BE A PASTY LEFT”.

The Pinup Girl Yardsale has expanded in size with each event. At the last event, the PUG Team was still encouraging people to come by HOURS after the doors had officially opened because they had plenty left to sell in every size.

So really, this is personal preference. I get there way before the event because I like to get in and get out like Tommy Wiseau buying a dozen roses.

Some people get to the event knowing there is going to be a line because that’s their time to socialize with other lovers of the brand. Some people come and then stay until the end, enjoying the music and eating at the food trucks.

Seeing as this event has been touted as the biggest ever, you can rest assured that there will be something for you any time you show up.

Another worry people often have is, “Am I going to be fucking trampled out there?"

The answer is a very reassured NO.

Again, in the past you may or may not have risked getting clawed over a dress or shoved away from a rack by a group of very impatient people. The good news is that times have changed and THAT SHIT ISN’T TOLERATED.

*Related, a picture showing how much that shit is tolerated*

Like seriously. If you’re caught behaving like a member of a Black Friday Walmart mob, you’ll be asked to leave without being able to purchase anything.

So don’t do it. If someone has their hands on an item you want, politely ask if you can be the first to get your hands on it next if it doesn’t work out for them in some way (doesn’t fit in the dressing room, they decide they want something else instead a minute on, etc.). If not, cut your losses and move on.

At the last Pinup Girl Yardsale, the team was staggering the number of people who could be in the room at one time – which was AWESOME because it basically assured that there was no way to be trampled and that everyone could be accounted for if shit did hit the fan.

look at yourself in the mirror with others crowding around it. Also, I’m not shy about being naked in front of anyone, but I’m sure it was a little nerve-­‐racking for some people to undress in a crowd.

On the topic of staggered entry into the Yardsale...when you’re done, get out of there so that someone else can come in. Seriously. Don’t loiter around and talk to your girlfriends inside – go outside where the food trucks are and loiter freely there so others can have their turn inside.

When you’re ready to make your purchases and leave, there will be an area designated for you to pay and checkout.

At every Pinup Girl Yardsale I’ve ever been to, both cash and credit cards are accepted. I prefer to use cash because the transaction is faster, but that’s just me.

bwahahahah this is so funny. And totally helpful! Thanks Sydney (skipping off to find you on ig)

Great blog, it's made me a little bit more determined to be there next year now ;)