That Time Tahitia Met Santa with Her Friend Lana

Hi guys, it's me Tahitia and I apologize for not having posted a review here on Pinup Girl Style in quite some time now, sorry! Believe me when I say that I'm still a PUG Superfan through and through, and so I'd like to make up for my absence here by sharing with you a very special review. The Lana Dress which I wore that time I met Santa. You can read the same review on my blog in it's entirety, but I wanted to share it here as well since this was the home of my very first regular blog AND where I met so many amazing women who I continue to be friends with to this day.

There's an awful lot that we leave behind as we get older, and in truth most of it is best left behind. As opposed to life as a child, as a grown up you have full control of your destiny, you decide what it is you do and when you do it, you decide who your friends are and you can make your own way in the world as an independent adult. No time wasted on things that don't interest you, no feeling helpless, and most importantly, not feeling afraid of monsters lurking in the closet or those things that go bump in the night.

Even still there are things we've left behind that are easy to truly miss. One of those things is Santa. To us all, there was a time when Santa was the epitome of all that was right, and fair in the world. Santa would know that deep down we were good, trustworthy children and that even if we slipped up from time to time, the fact that we always meant well meant that come Christmas morning we'd have a present waiting for us under our tree. No matter how many presents or how few there were, it was because he knew we were good children, and we loved him for it.

It had been a long time since I went to see Santa, and it might have been even longer since I really believed that the rest of the world could ever be as fair as I was told he was. What we've come to call the "real world" doesn't often reward people who try their best but make the odd mistake, does it? Far too often those good children grew up to be good grown ups but still got left behind. I don't know why that is, I just wish it wasn't the case.

Maybe that's why some people say that Santa is only for kids, because deep down those same people believe that only children should dare to think that being good is a constant and guaranteed reward in the universe.

Maybe it was that belief that I miss so much along with so many other things I've left behind. I remember my father taking me to see Santa. I remember telling Santa what I hoped to get for Christmas this year, and I remember him laughing like a bowl full of jelly and I remember believing that the world made sense.

I went to see Santa Clause this weekend for the first time in a very long time. I told him that though I may have been what some would call naughty this year, my intentions were nice. He thanked me, and I thanked him. I don't know what will happen come the morning of December 25th, much less in the distant future. I do know that there's no need to worry about getting what I want for Christmas now, I already have it and I couldn't ever ask for anything more. 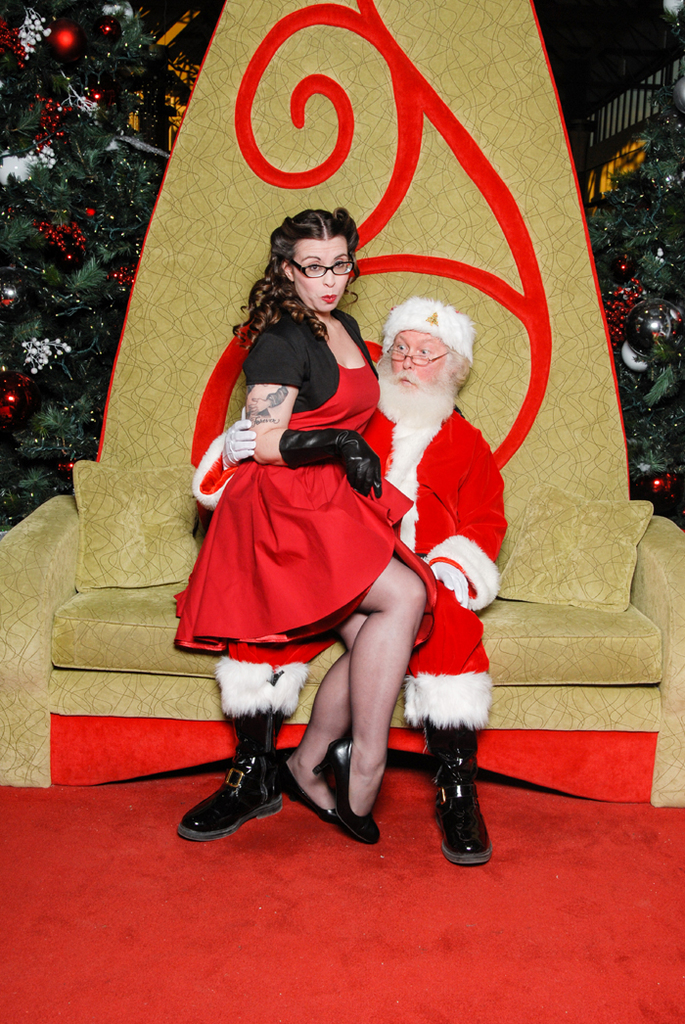 I'm wearing a few tried and tested favourites from Pinup Girl Clothing in this picture, and a new addition to my wardrobe as well. First we have the oh so elegant Opera Length Gaspar Gloves in Black Black Kidskin Leather, as well as the Perfect Pinup Shrug in Black Ponte by Pinup Couture. I own the shrug in a medium but I'm closer to 17" in the shoulder now so I could probally get away with a small but the medium still fits well enough and I don't have any complaints ;)

Last but not least, we have the Lana Dress. At 28.5” in the waist and 38.5" in the hips I admit I played it safe when ordering a medium but I think a small could have fit better. I'll get the medium taken in, and either way it's a fantastic dress that I couldn't be any happier wearing.

Well that's it for now. I promised you guys one last post before Christmas and here it is! I hope that you enjoyed it and no matter what you keep Christmas and or any of the holidays close to your heart.