Time is so very precious. Why does it fly by so quickly? Why do the great times in life go by even quicker? Oh well, stuff happens. And a few weeks ago I had a glorious holiday in New Orleans. This is the stuff that dreams are made of. A very long time ago my spouse and I decided that going on vacations are a very top priority for us in our lives. We have so many interests. And we have so many things that we love. A few months ago we decided that we had to go to New Orleans. Quite a few of our friends have visited NOLA and told us how great it is. We believed them. But we kept on going to other places. Finally, it was time to visit.

We figured that in January it would not be hot and not be muggy. It was perfect weather! We wanted to be able to partake in all of the wonderfulness of the city. But we did not want to have to deal with the craziness, the drunkenness or the crowds of Mardi Gras or the Jazz Fest. Again, it turned out that January was the perfect time for a visit.

There were a few things that we wanted to get from our visit: music, dancing, great food, history, culture and friendly people. We were not disappointed! Let me first talk about music and dancing. New Orleans has a public radio station, WWOZ, which mostly plays local music. And they publish a daily guide to all local music events. That was my bible! I used it to plan all of our musical adventures. Every night that we were there, we went to hear music. First of all let me talk about the Cajun and Zydeco music we heard. Those are both musics of the bayou regions of Louisiana. Cajuns are the white, French speaking inhabitants of Southwest LA. And Zydeco is music of the Creoles, the African Americans of that region. My spouse and I have been listening to, dancing to and loving the Cajun and Zydeco music for a very long time. Here in Southern California we have a few music festivals that feature this music every year. We went to three performances of bayou music while there. First of all we went to a Cajun Fais Do Do at Tipitinas feautring Bruce Daigrepont. He is a pure Cajun. And he plays with great energy. 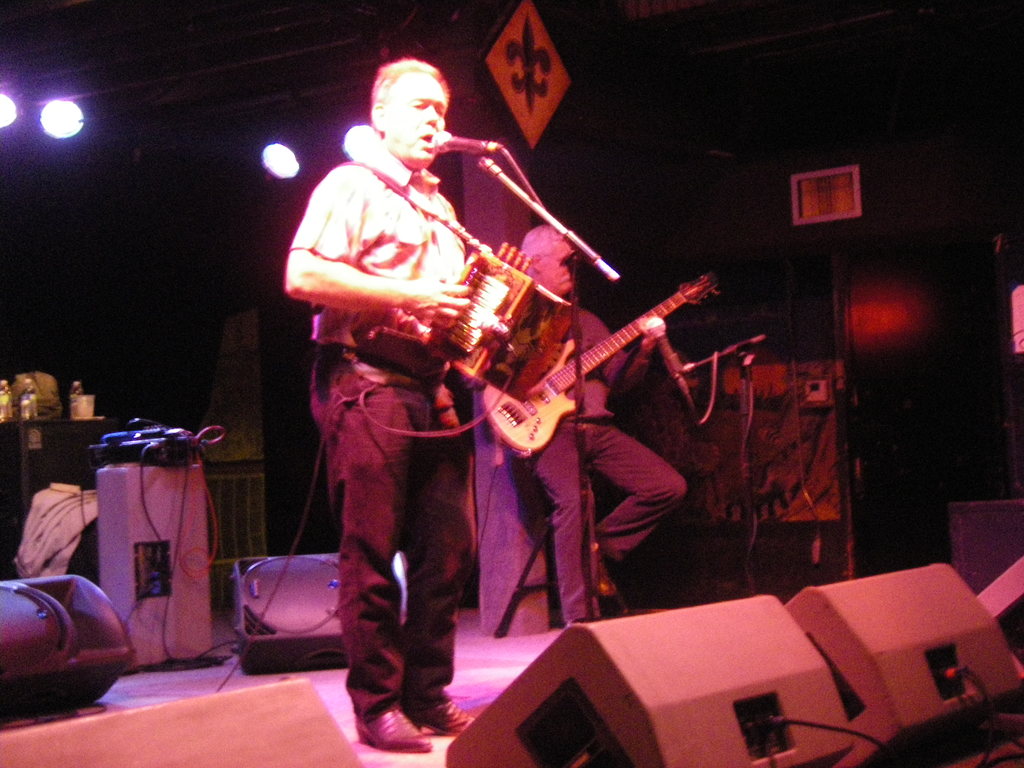 Next we went to the Rock 'N Bowl.Yep, a combination bowling alley and nightclub. This was our night to hear zydeco. the club was packed and people from all over the world came to dance. We heard Chubby Carrier, a very roots oriented player. And danced up a storm. Finally we went to Frenchman Street an area of two blocks jammed packed with music clubs. We went to the DBA club and heard one of our favorite young Cajun groups, The Pineleaf Boys. They stir up traditional Cajun music with a good deal of Louisiana swamp pop into a potent gumbo mix. 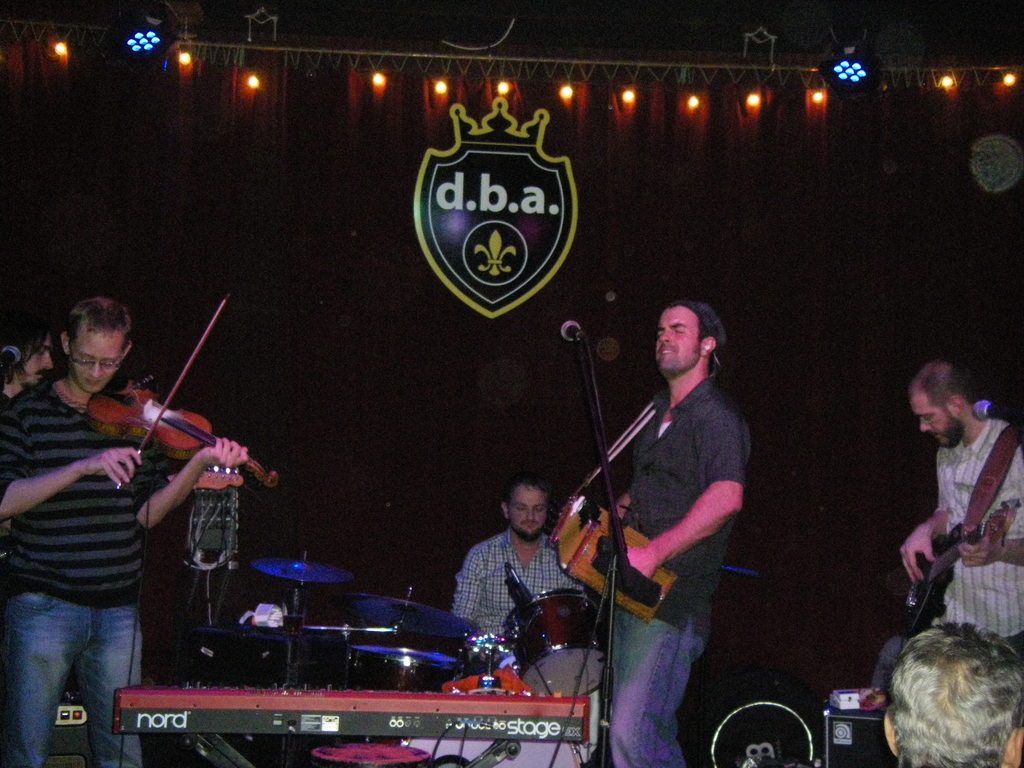 There were two groups that we particularly fell in love with during our NOLA vacation. They both play a traditional style New Orleans jazz mixed with gypsy jazz of the Forties, spiced up with the blues and modern sensibilities. Meschiya Lake and The Little Big Horns are totally tremendous. Ms. Lake is totally tattooed, totally beautiful and a totally awesome singer. She has a raw, yet supple voice that sounds as if it is coming from a singer from another dimension. I definitely recommend that everyone check her out. http://www.meschiyalake.com/http:// 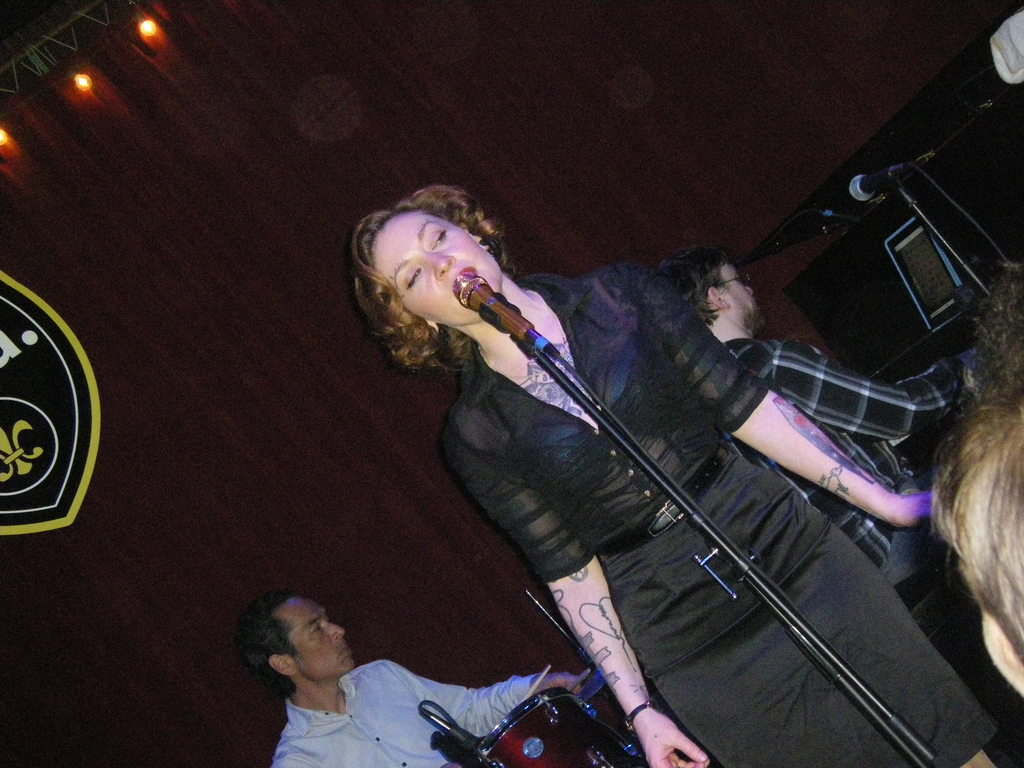 And then there was Chance Bushman and The Smoking Time Five. Bushman runs a dancing school in NO. He is a terrific dancer and he tap dances while he sings.The instrumentalists in this band are fantastic. They play a slightly more sophisticated take on New Orleans jazz. We saw them in an elegant hotel. And we also saw them doing a street performance. The venues were way different from each other but the musicians were great in both places. http://www.chancebushman.com/  http://www.smokingtimejazzclub.com/ 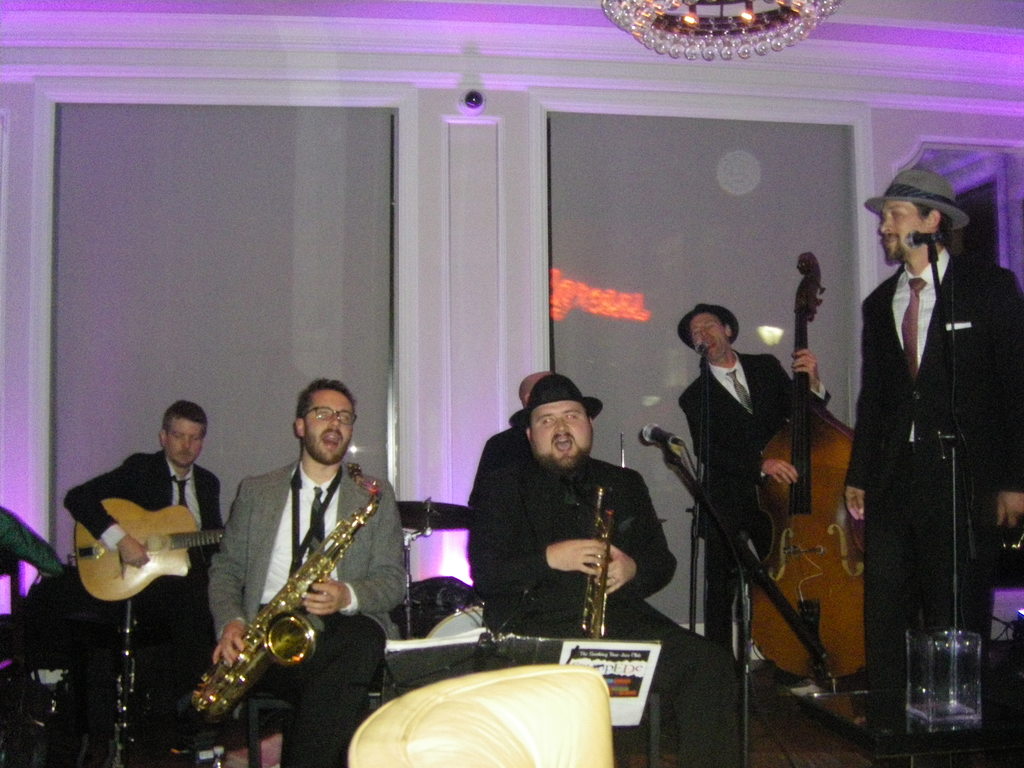 I will tell you about one more musician who we love. His name is Kermit Ruffins. He is kind of like a hip, modern-day Louis Armstrong. He was featured in a few of the episodes of the Treme series which played on HBO. He plays at venues throughout New Orleans almost every night of the week. We saw him play at this weird sports bar. He had been obviously "enjoying himself" prior to his gig. So it was a bit sloppy. But it was still great to see him in person. https://www.basinstreetrecords.com/artists/kermit-ruffins 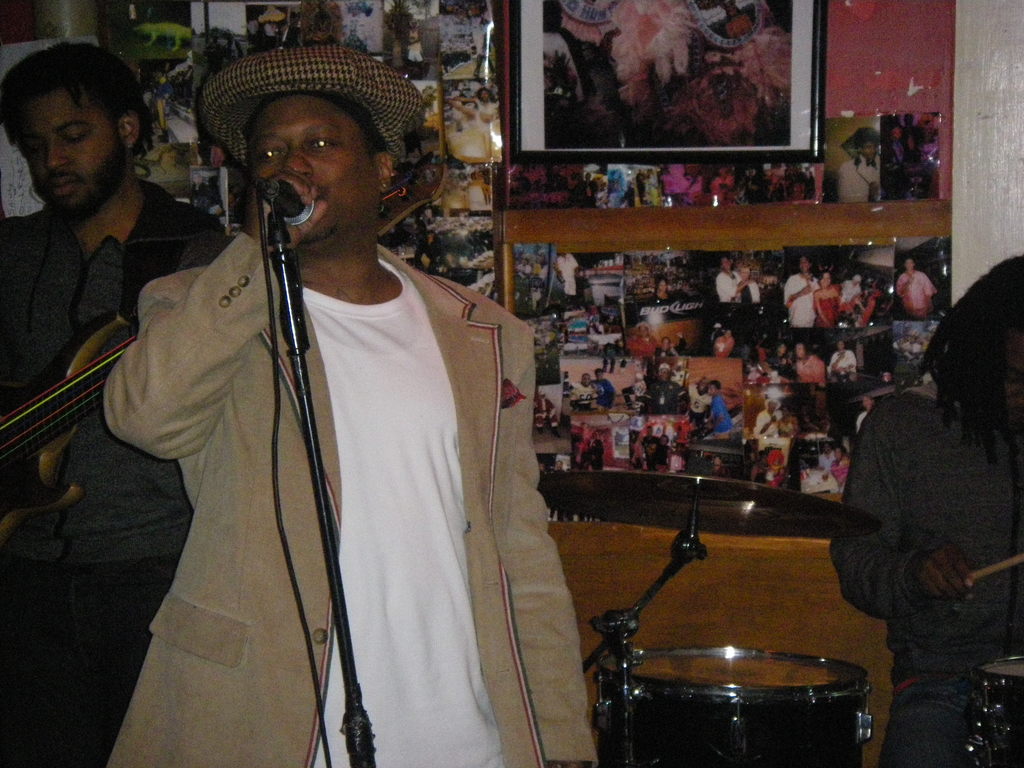 ... oh my! It has been almost two weeks since I wrote anything on this entry. Maybe I had better just finish this thing up  right now. So New Orleans has great food. The food of Louisiana is a melange of influences making for one very tasty cuisine. All of the meals we had there were good and most were great. The restaurant that wins the award for favorite was Bayonna. We had both dinner and lunch there. It is a bit pricey but it is worth every penny that you spend. Here is a snap of one of the dishes that we ordered. 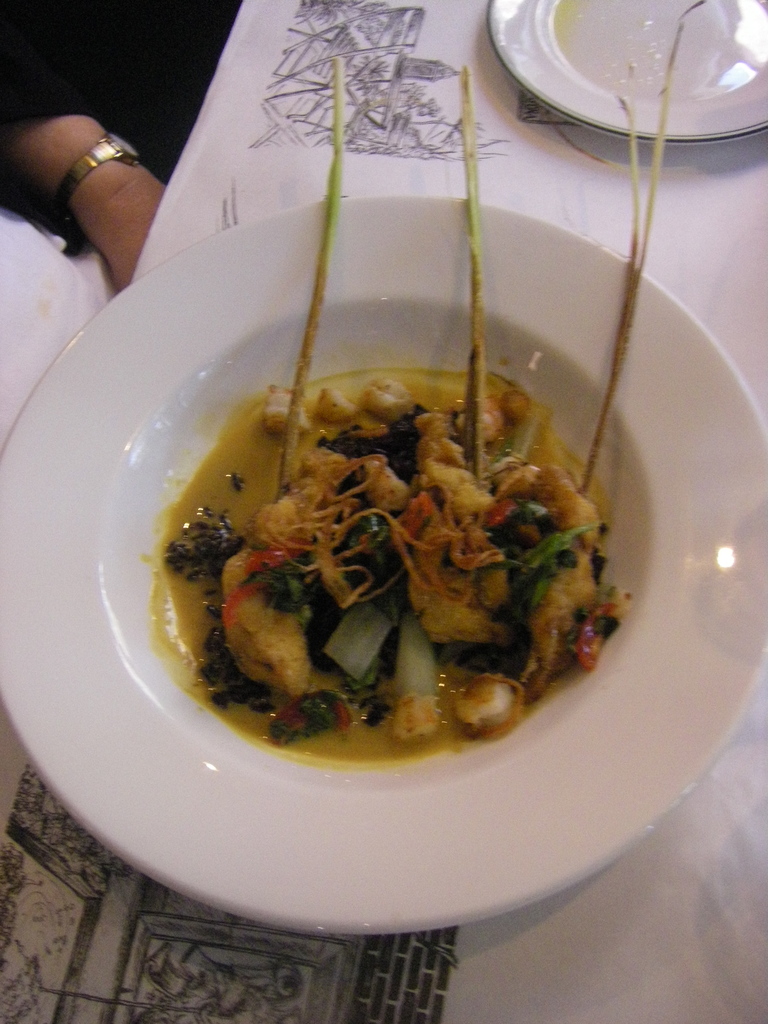 New Orleans is also a great place to shop. The Trashy Diva repro clothing brand is headquartered there. And they have a few boutiques there selling their stuff. I bought a dress that was more than half off and I bought a great set of lingerie. There are lots of cute boutiques and second hand stores in the French Quarter. Check out this great sign in one shop window. 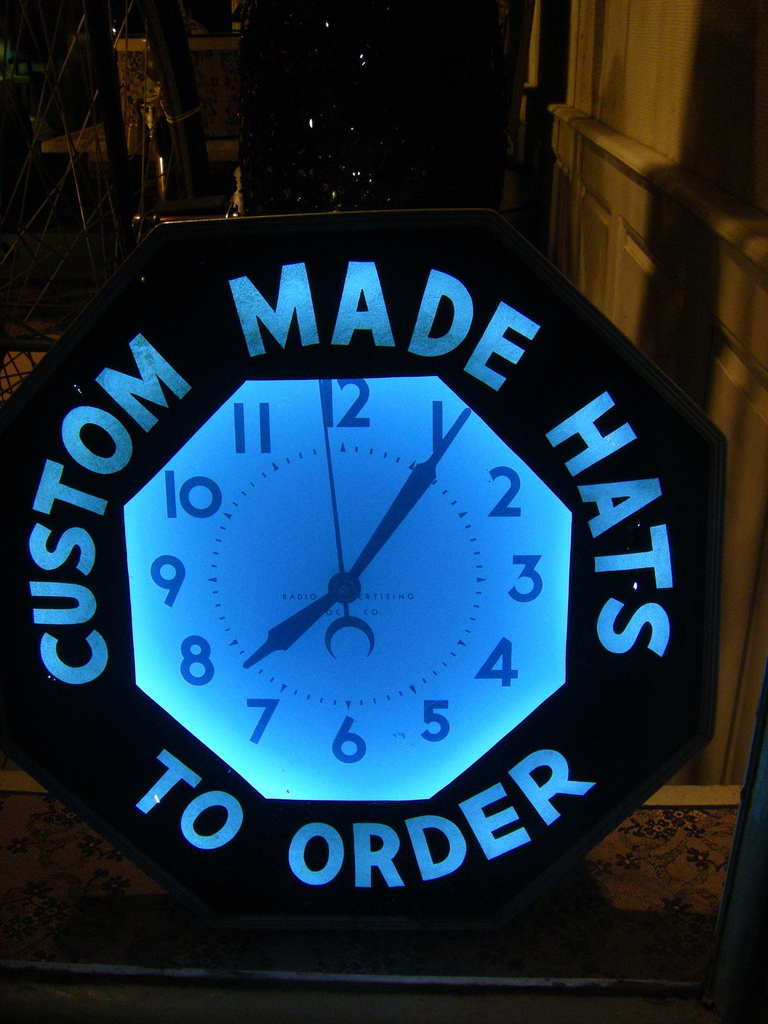 NOLA has some great museums, interesting old homes and lots of other places which give one a taste of the history and culture there. I think that I will just tell you that you must go there yourself to find all of this out. But I must tell you about one more very interesting piece of info. New Orleans is home to many amazing old cemeteries. And one of the cemeteries has the second most visited grave site in all of the US. In the St louis Cemetery #1 is the grave of the Voodoo Queen of New Orleans, Marie Laveau. She was an amazing woman who lived in the mid 1800s. Her story is quite remarkable. I urge you to check her out sometime. Here is a pic I took of her gravesite. 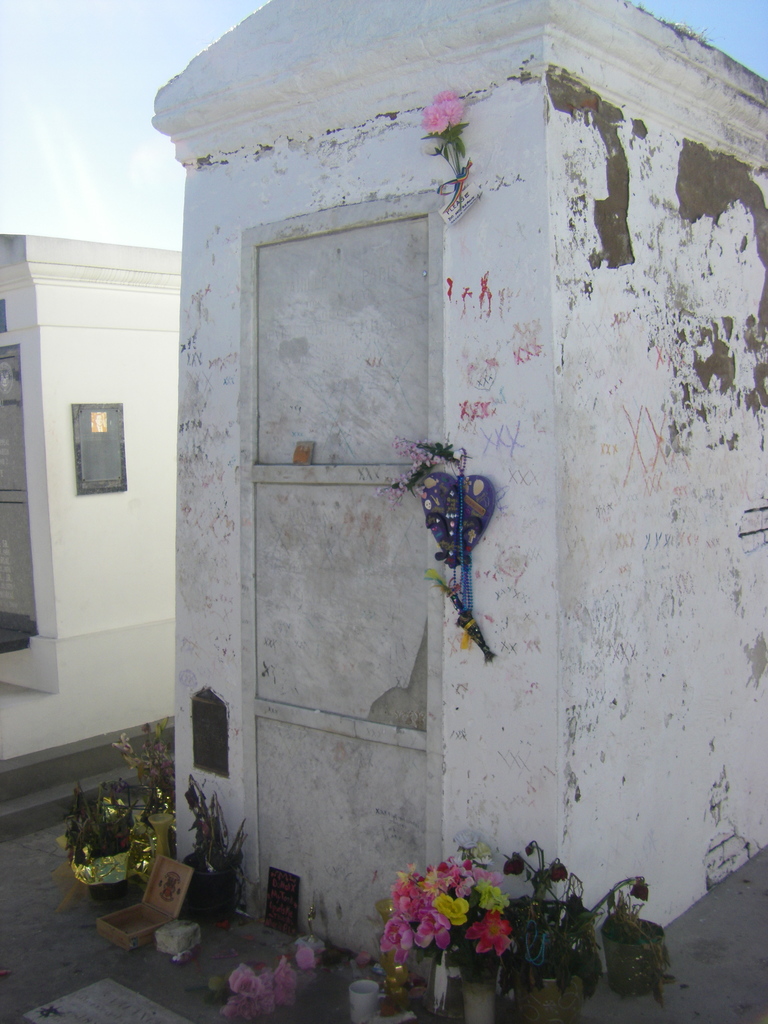 I could tell you lots more stories and I could share more pics with you. But that will have to wait. Maybe I can save some for the next So Cal Meet Up. Anyway, this was my first trip to New Orleans but it won't be my last. There is so much to do there. And I must say, there is so much of interest to us pinup girls. As they say down there, "I guarantee that you will pass a good time".

Awe no photos of you!! It looks like you had a great time

thank you - i've always wanted to go to NO, but wasn't really sure when would be a good time for me (as a single gal, travelling alone). January sounds ideal, and i'm thinking a birthday trip is in order... everything looks/sounds fabulous!

Comment by Andrea B on February 22, 2014 at 12:22pm
Thank you so much for that post. I am very unlikely to ever go to NO and so now I have the essence of the place without the long plane journey. So glad also you and your spouse had such a great time together- that really is so important in life. Please keep these posts coming they are such a highlight of this site.

I LOVED NOLA!  I'm glad to hear you enjoyed it too.  It really is a unique place.