Once again, I have decided that I might as well do some more self promotion and do another blog post. I have nothing to promote really. But I just like to share with my peers. And my important peers are PUGsters. So here goes.

There is no rhyme or reason to when I shop. I do always like to look for a bargain. So when PUG's website has a special sale I usually try to take advantage of it and buy myself a piece of two. Sometimes, I am buying for a special occasion. Sometimes I am buying an item because I already have one in a different color or pattern. And sometimes I just make a guess and think that something might work for me.

So back in early September I took advantage of an online sale and one of the items I bought was the Jessica Wiggle Dress in red. I looked at the measurements of the dress and the "stretch factor" and picked a dress in large size. i usually buy my things in XL, but  I have found that with some of PUG's dresses I can get into a large. And when I want figure hugging appeal, the smaller size is sure to fit the bill.

This was one of those times when I just bought a dress without any special occasion at which to wear it. But within a few weeks I got an invitation in the mail for a very special night at the Huntington Library and Gardens. The Huntington is an amazing museum, library and botanical garden located in San Marino, California just next door to Pasadena. I have been going there since I was a poor college student. it was the perfect place to get some free culture and relaxation. It is no longer free to get entry. So for a number of years my spouse and I have been members. And in the last couple of years we bumped up our membership so that we could be invited to special openings, events and early entry. So back to the story, the Library was having a special evening party with lots of food and drink. It was intended to show off their newish Chinese Gardens and as a fund raiser to gather more money to expand the Chinese section. The invitation suggested "cocktail appropriate" clothing. And I knew exactly what to wear.

Before arriving at the Huntington I stopped at an intersection in San Marino where there is a picturesque clock tower. I thought that I might get some good shots of myself with the clock in the background. I pulled out my tripod out of my car, set my camera's timer and took some shots hoping that they turn out nicely. Things looked pretty good when I looked in the viewfinder. But something happened that has never happened to me before. A guy driving by pulled to the side, rolled down his car window and then took a photo of me! That was kind of weird, but kind of cool at the same time! Here is a clock tower pic: 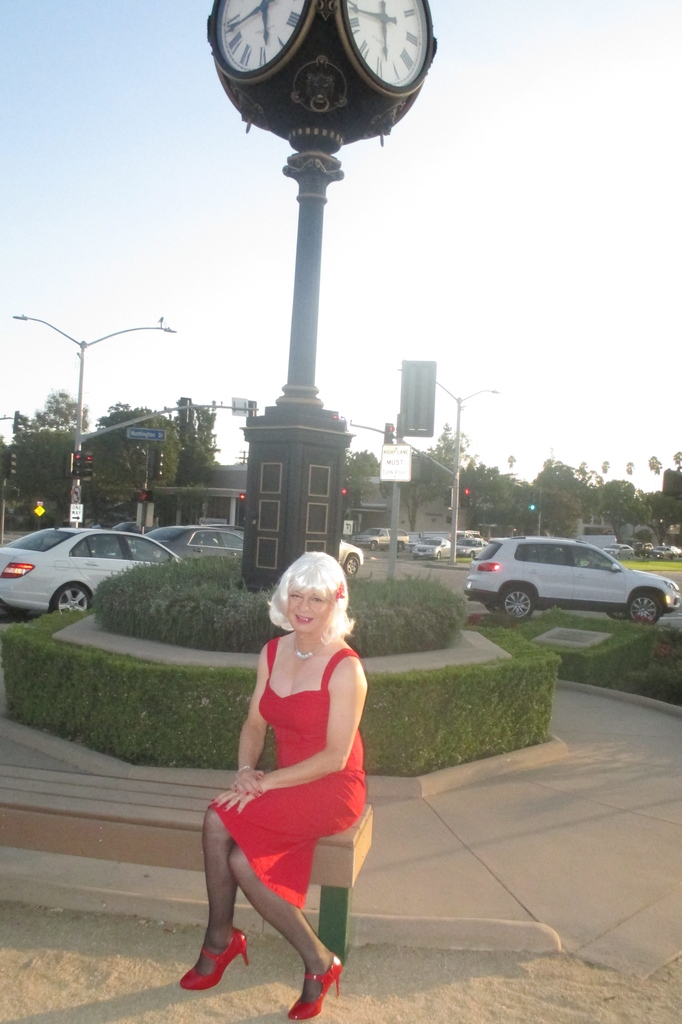 I drove the few blocks to the entrance to the Huntington. Since it was a special event for upper level members only there was a guard at the gate. When I drove up to him and rolled down the window, I told him that I was there for the special party. Then he gave me one of the best compliments that I have even received. He said "Has anyone ever told you that you really look like Marilyn Monroe?" Well no one had before that. But it made my day.

So I have a few pics that I had taken while there. All of them were taken by other party attendees. And one was taken by a photographer there which I have scanned. Why don't I start with the professional one. This was a really fun event. There were lots of food stations serving all sorts of wonderful Chinese food. The San Gabriel Valley area of LA has a huge Chinese population. And some of the best Chinese restaurants in the world are located nearby to the Huntington. So although the food was mostly of an appetizer nature, it was delicious. And there was lots to drink. And I have to admit it, I have a weakness for bubbly wine. And so I had about three glasses of the wonderful Spanish sparkling wine they were serving. Luckily I was eating enough and walking around the grounds so that hopefully I burned off some of the alcohol before I had to drive to my next activity. This pic was taken by a kind woman who was taking photos of her husband and mother. This turned out really well: 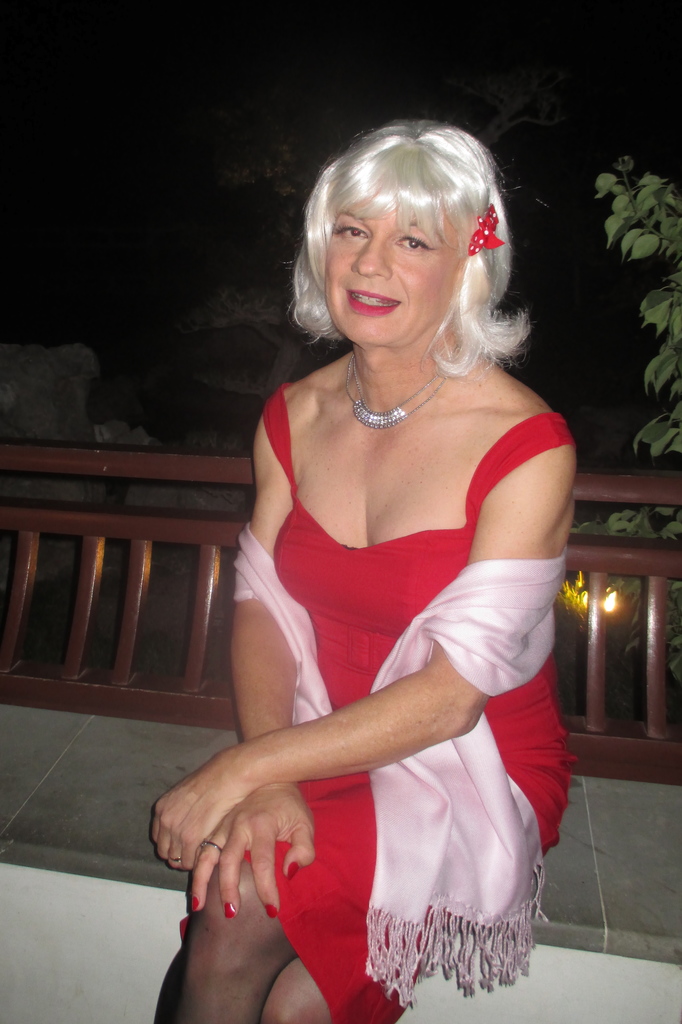 The mother of the photographer was complimenting my entire ensemble and was telling her daughter to make sure she got everything including my shoes. Well she did get a shot with my shoes but this one is better.

I think that I will post one more pic. Oh yes, this one will do nicely. This was taken at the entrance to the Chinese Garden right after the section with most of the food and drink. I guy was standing waiting for someone, maybe his wife, and I asked if he'd do me a favor and take a photo. 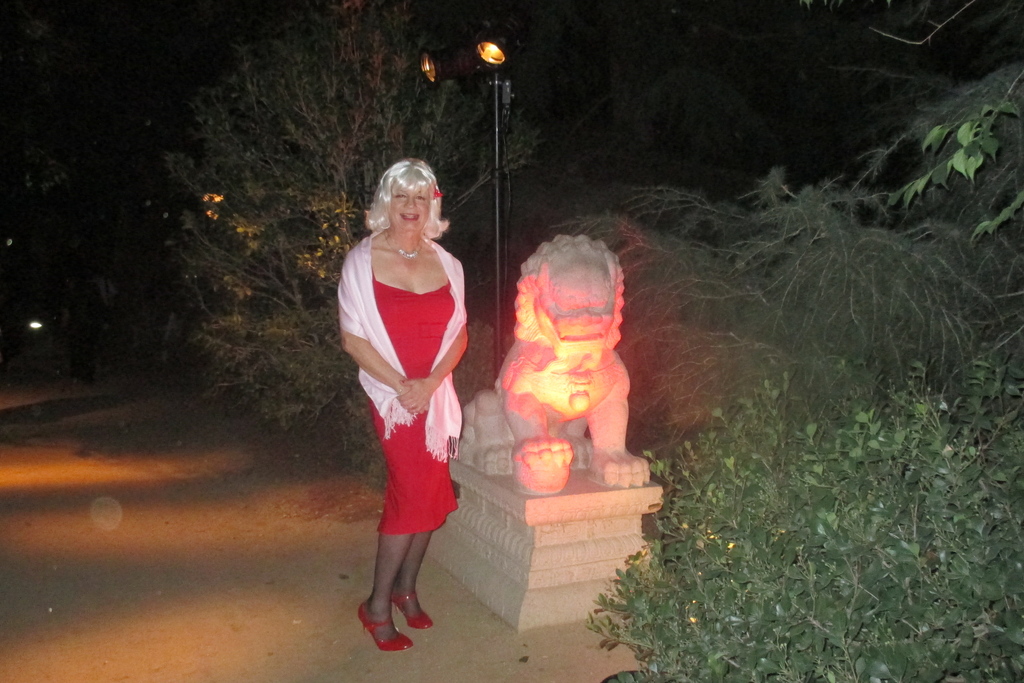 There is one very important pice of news that I have neglected to tell you yet. That is that the pashmina I am wearing was given to me by one of my PUGster sisters, Miss Venom Miss. I got this as a part of a gift she sent me from being in the PUG Pals group. I have told her directly and I have posted thanks in the group comments. But now it is time to do a site wide thanks. THANK YOU MISS VENOM MISS! I love this pashmina.

Well my dears, I think it is time to wrap up this post. I don't actually think that look much like Marilyn Monroe. But I do know that almost every time I wear Pin Up Girl Clothing I feel fabulous. And I feel that I could be hanging around with the glamour girls of the past and would probably fit in pretty well.

You look so lovely! Classy, elegant.....there are so many ways to describe how you look! I'm so glad that you like the pashmina. I'm considering getting a Jessica soon because of your pictures. I'm stalked that dress for years and I might have to take the plunge soon.

You look amazing, once again! Love the shoes!

Thanks to all of you! You all provide me with inspiration and motivation. I came to PUG Style because of my love for PUG clothes. But I participate in this forum because of the incredible people who make this so unique and so special.

Aoife you look wonderful, as ever!  And are - once again - making me jealous of all the things you get to do ;)  Living the small-town life is really rather dull, so I'm glad I get to live vicariously through you!

lol, sammi, i live 20mins away from her, and i'm jelly of all the cool things aoife does!! and i will have to take a day to visit the chinese gardens! as always, red does you so well and the dress fit is fabulous!