If you have read the previous blog posts I've written, you know that through PUG Style I've have met some wonderful people and had some great experiences. Well, I am back. And I am here to tell you that PUG Style has allowed me to meet some more great people and to have some new great experiences. After the last shopping meet up I had with some of the So Cal gals, I thought I would ask if anyone was interested in going out for afternoon tea, a proper British tea. I got some interest but most were not able to attend on the day I had selected. Only one PUGster was available. And that was Dorthy Treasure. She jumped at the chance to go out to tea. It turns out that she has been enamored with doing tea since she was a child. And so, she was a definite YES. Yesterday, Saturday April 20th, she and I met up at the Chado Tea Room in Pasadena. I selected Chado because it is a proper tea room and because it is also very reasonable. And for Dotty it was perfect because it was only half a block away from the Metro Gold Line stop. I had bought a Zebra Striped Vamp Dress and I wanted to wear it for this special occasion. I spent at least a couple of hours during the week prior picking out all the right accessories, shoes, underthingees, wig and hat. And even though I had more than a couple of hours to get ready, I still spent about ten minutes in my car after I'd parked making my final adjustments to my makeup, hair and hat. Dorthy was waiting outside the tea room for me. She looked so beautiful in her colorful flowered dress with a cute bolero style sweater. And I have to tell you, Dotty was absolutely wonderful. She is so interesting and has lead a very interesting life. We got to know each other, swapped lots of stories, sipped on our teas and ate some tea goodies. I must say that the food was a bit lacking on this particular day. But we still enjoyed the sandwiches, the scones and the sweets. Having tea with Dorthy was just a tremendous experience. Here are a couple of pics. Of course the first pic is of Dorthy. The second is of me. 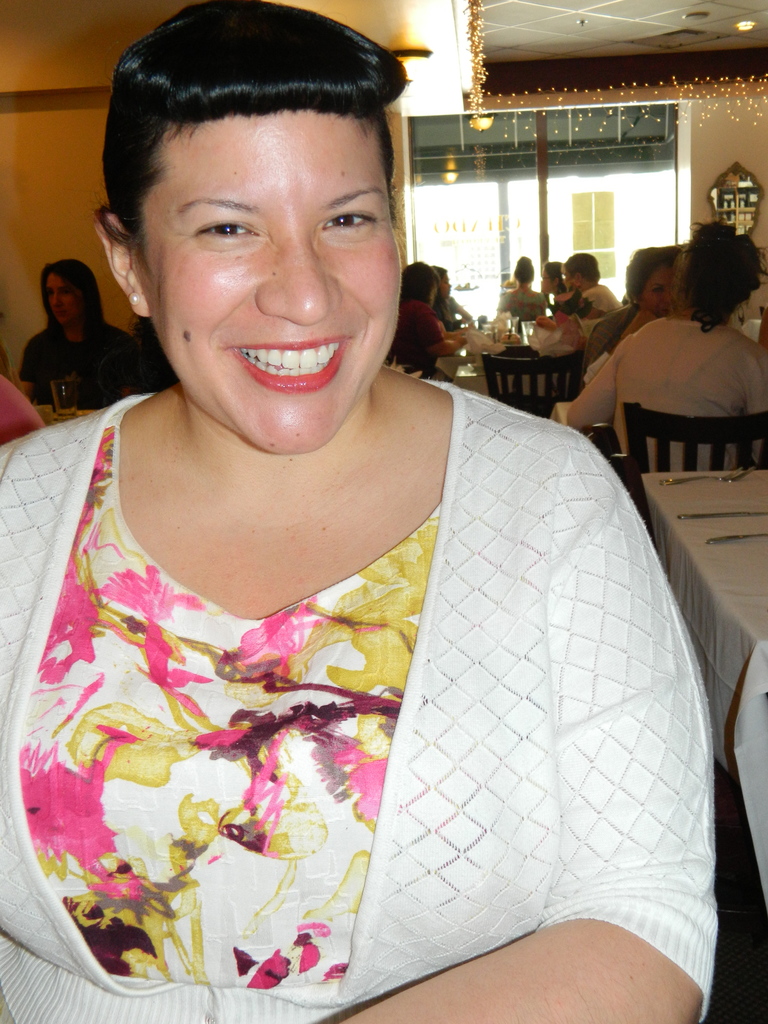 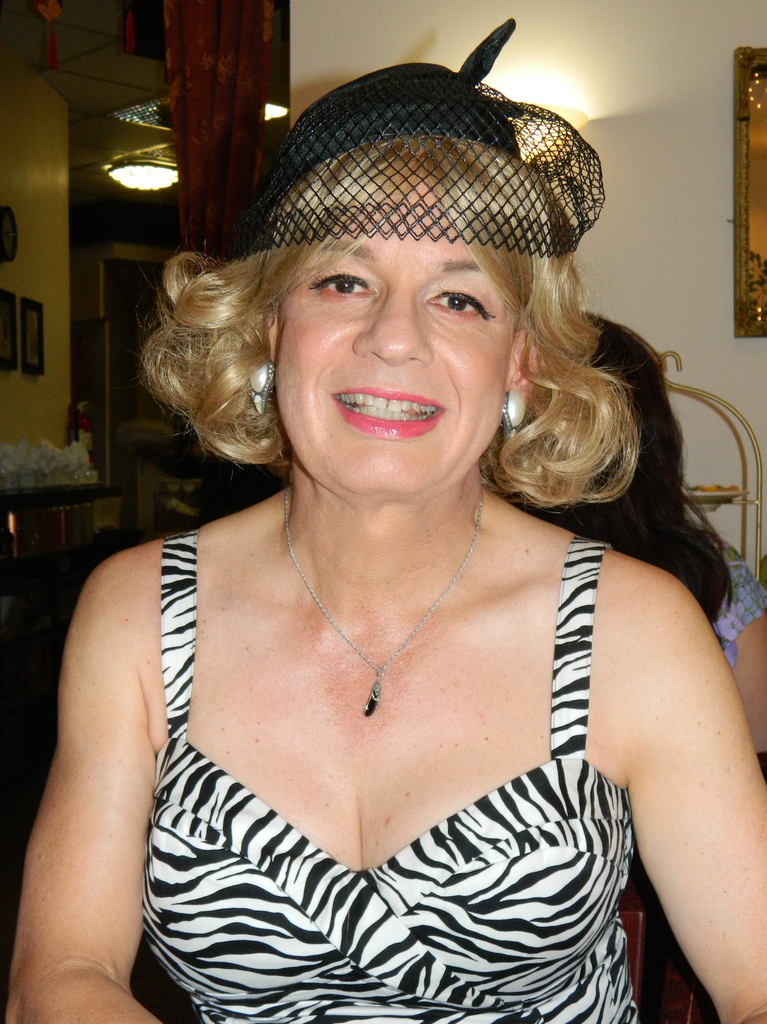 Well after a couple of hours at the tea we decided we still had time to do what most of us love to do... SHOP! I suggested a little vintage boutique in Pasadena that I had been by in the past but never had gone inside. Well, the shop had some wonderful clothing, but it was all quite expensive. They also had some cute little knick knacks, but even those were a bit too expensive. So then Dorthy suggested going to a retro/rockabilly store in South Pasadena, Viva Dulce Maria. It was just about the smallest pinup related boutique I've ever been in. But they had a nice selection of clothing and accessories. I ended up buying a cute belt and a snood for myself and for a very special person I bought a petticoat. The couple who run the store were really quite nice. And I definitely plan to return. Well by then it was time for the two of us to part, but not before we took a few more pics. They were taken at the Metro stop where Dotty was catching her train. And once again the first pic is of her and the second is me. 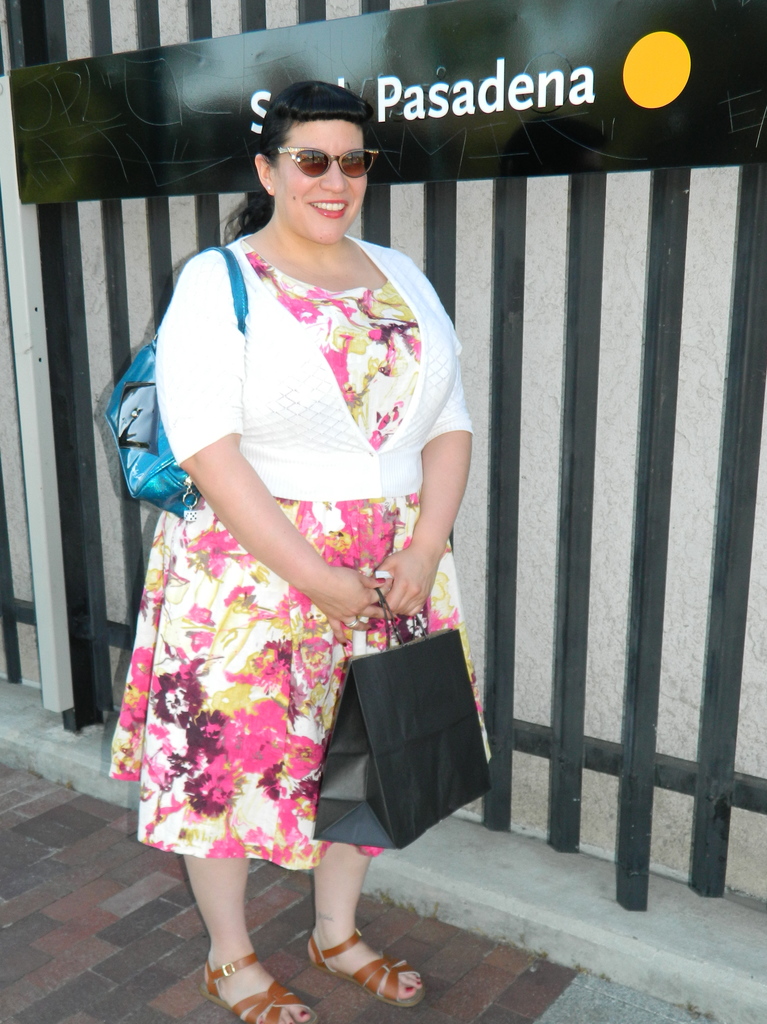 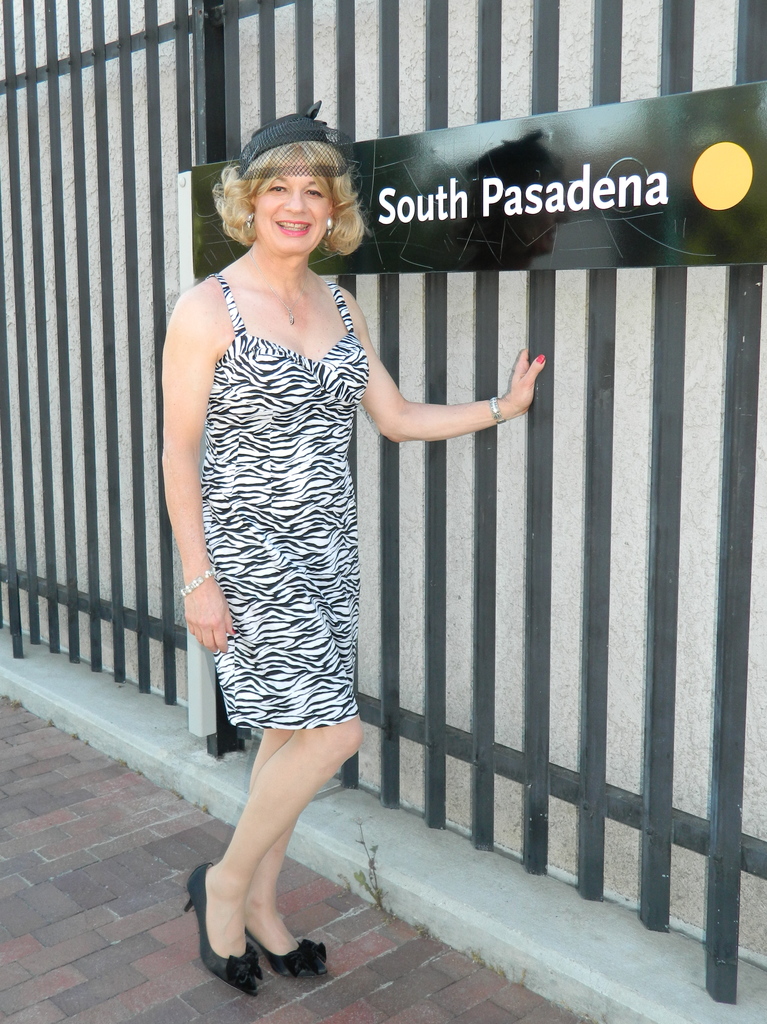 Although I am not on Facebook, I check the PUG related Facebook sites to keep updated on PUG developments. I discovered that Micheline was having a launch of her new DVD, all about makeup and looks for pinup throughout the decades. So I was able to have a second PUG activity yesterday. Somehow in coming from the Pasadena area, I erred in getting myself to the PUG Boutique. But I eventually got myself there, and I was only about ten minutes late. The event started at 6 PM. I was very, very happy to meet a PUGster with whom I had corresponded, but never met. Her name is Emily and she was there with her boyfriend. They were both great to meet and chat with. And of course I was able to convince Emily for me to take her pic. And she returned the favor of taking my pic. I was welcomed by some of the ladies who work at the store and whom I have met before. I want to especially single out Doris Mayday who always remembers me and who welcomed me with a hug. Emily and her boyfriend had to leave early so I was just kind of standing around waiting for my chance to get Micheline to sign my copy of her makeup DVD.
There were so many beautiful PUGsters in attendance. I must admit that I was a bit in awe of all of the dolls who were there. But I was also feeling proud of the way I looked. And I was happy to be in the same room with so many like minded souls. But while waiting around I met two wonderful women who were by themselves and the three of us started talking and hung around together for the rest of my time there. Now this is where I have to beg for forgiveness. There was a woman with curly raven-black hair who was just a kick to talk with. And she had the greatest tips for making ones "girls" look their perkiest. Oh and she helped me make an adjustment in my girls which I had not noticed that I had needed. let me just say it was a rather warm day in LA and the heat and sweating caused things to get a bit our of alignment. Anyway there was also this woman with striking straight blonde hair and the most amazing lip color. These two ladies were incredible. And I have totally forgotten their names. So if either of you are out there please right me and set me straight. Also I would love to be able to meet you both in the future, so I hope that you both are out there. And sorry to say I did not get pics of either of them. But I did get a pic of me with Micheline. And I think that it turned out quite well. Micheline did an in-person eyebrow tutorial but sadly, I had to leave in the middle of it. 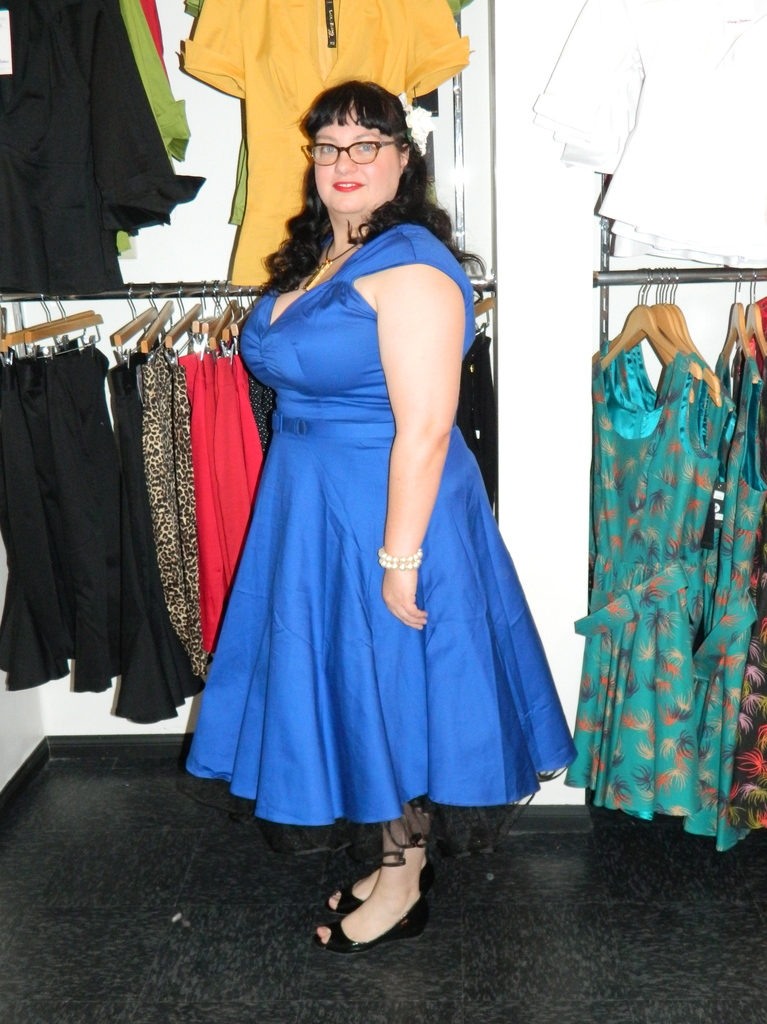 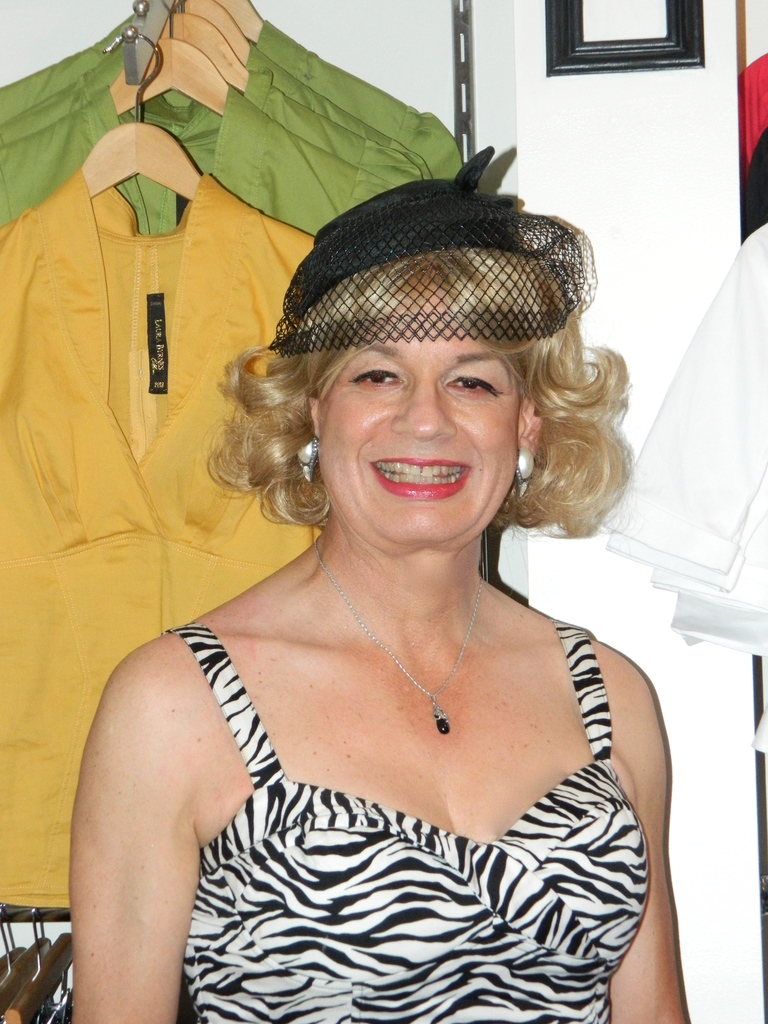 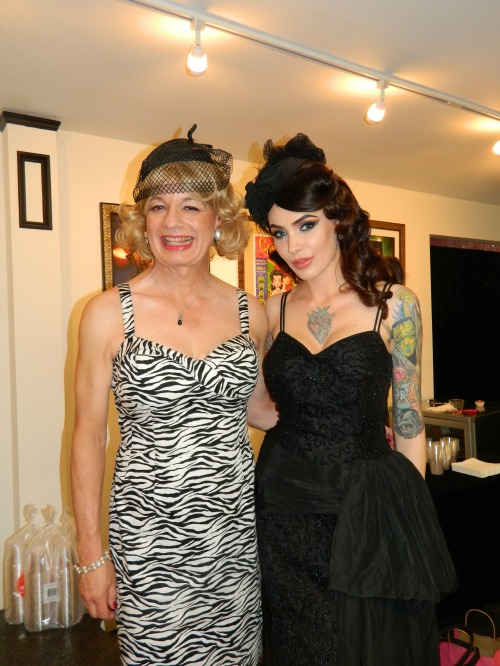 What a wonderful Saturday I had. And it was all because of the connections I have made through PIn Up Girl Clothing. I am eternally grateful to all of you at PUG who have made this possible.

Aoife this is another amazing blog of yours, thank you so much for sharing. You are so beautiful, and so is Dorthy too ;) You make an adorable pinup pair!

If I'm ever in the L.A. area I would LOVE to have tea with you and some of the other PUGsters. Speaking of which, would you mind sharing some of those tips on keeping our "girls" looking their perkiest?

Thanks ladies for your kind comments. Once again, this proves to me how supportive the PUG community is. Brandi, it would be an honor for me to share my things with you. I'd love to have a little sister who I could share my love of PUG with. I would love to take Amber, Brandi, Natalie and Tahitia on a tea outing.

Oh and Tahitia, I will make this short but one of the ladies told me about cutting a sock in half and then using it in the base of ones bra to give extra oomph up top. She said that one should not roll up a sock it just looks too bulky. And when and if I remember of find out the doll who gave me those tips I will let you all know.

I love reading fun stories about PUG ladies meeting up! I wish I could be apart of these! Aoife, I love how detail-oriented you are! Keep the stories coming!

I hope you had a lovely time! great photos and what pretty ladies you are! If I'm ever in Cali/you're ever in Europe I so LOVE tea! :)

I so love our outings!! And so happy to have met you and call you one of my dearest friends!!

And you are totally rocking that zebra print vamp dress!!!